Humans' superior brain size in comparison to their chimpanzee cousins traces all the way back to the womb. That's according to a study reported in the September 25 issue of Current Biology, a Cell Press publication, that is the first to track and compare brain growth in chimpanzee and human fetuses.

"Nobody knew how early these differences between human and chimp brains emerged," said Satoshi Hirata of Kyoto University.

Hirata and colleagues Tomoko Sakai and Hideko Takeshita now find that human and chimp brains begin to show remarkable differences very early in life. In both primate species, the brain grows increasingly fast in the womb initially. After 22 weeks of gestation, brain growth in chimpanzees starts to level off, while that of humans continues to accelerate for another two months or more. (Human gestation time is only slightly longer than that of chimpanzees, 38 weeks versus 33 or 34 weeks.)

The findings are based on 3D ultrasound imaging of two pregnant chimpanzees from approximately 14 to 34 weeks of gestation and comparison of those fetal images to those of human fetuses. While early brain differences were suspected, no one had previously measured the volume of chimpanzee brains as they develop in the womb until now.

The findings are part of a larger effort by the research team to explore differences in primate brains. In another Current Biology report published last year, they compared brain development in chimps versus humans via magnetic resonance imaging (MRI) scans of three growing chimpanzees from the age of six months to six years (see http://www.eurekalert.org/pub_releases/2011-08/cp-lhc_1080511.php).

"Elucidating these differences in the developmental patterns of brain structure between humans and great apes will provide important clues to understand the remarkable enlargement of the modern human brain and humans' sophisticated behavior," Sakai said.

The researchers say they now hope to explore fetal development in particular parts of the brain, including the forebrain, which is critical for decision making, self-awareness, and creativity. 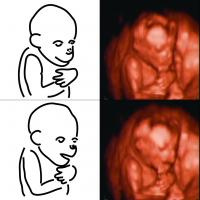