Light carrying photon momentum can push and pull microparticles through momentum exchange. This momentum exchange progress generates optical forces, either attracts (conventional optical tweezers), pushes (radiation force) or pulls (pulling force) microparticles. A new emerging research interest, optical lateral force which represents the optical force perpendicular to the propagating direction of a non-gradient beam, has attracted much attention. The lateral force can be generated using achiral particles through the conversion of spin and orbital momentum of a circularly polarized beam. It is also predicted that a chiral nanoparticle placed above a surface can generate the lateral force using a plane wave excitation. However, there are few demonstrations of the chirality dependent lateral force, and the particle used in the theoretical prediction are 100 nm which has limited applications. Besides, the theory of optical lateral force on bigger particles (size ~ wavelength) is lacking.

In a new paper published in Light Science & Application, scientists designed an experiment to demonstrate the chirality-dependent optical lateral force. They synthesize microparticles with strong chirality and float them at the interface of air and water. After illuminated with an obliquely incident linearly polarized beam, chiral microparticles with different handedness (left and right) will move to the opposite directions. Interestingly, they find in theory that the optical lateral force could reverse sign with different light polarization and indecent angle, chirality value and particle size. They also developed intriguing models in the perspective of momentum transfer to elaborate this optical lateral force. The reported method and technique will open new avenues for future direct detection and sorting of microparticles with imperceptible chemical differences and inspire the exploration of optical phenomena with light-matter interactions.

The experimental setup is facile, only requiring a s- or p-polarized laser beam and focusing it into an elliptical shape using two cylindrical lenses. The chiral microparticles are floating at the interface of air and water in a microwell fabricated using the soft lithography. This configuration offers many possibilities to probe intriguing optical physics, such as spin-orbital interactions, chirality sensing, etc.

These scientists summarize their work as:

"Our method is insightful and helpful to the demonstration of extraordinary forces since it rules out the optical gradient forces in conventional optical tweezers. It helps to complement the realm of optical lateral forces in both theory and experiment. The presented technique can be used to contactless monitor the handedness of the chiral particles which exist widely in the drug industry and biomaterials without the testing with chemical or biological methods." Dr. Yuzhi Shi and Prof. Cheng-Wei Qiu added. 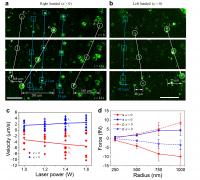