MIAMI--A new study led by scientists at the University of Miami (UM) Rosenstiel School of Marine and Atmospheric Science provides evidence that humans are influencing wind and weather patterns across the eastern United States and western Europe by releasing CO2 and other pollutants into Earth's atmosphere.

In the new paper, published in the journal npj Climate and Atmospheric Science, the research team found that changes in the last 50 years to an important weather phenomenon in the North Atlantic--known as the North Atlantic Oscillation--can be traced back to human activities that impact the climate system.

"Scientists have long understood that human actions are warming the planet," said the study's lead author Jeremy Klavans, a UM Rosenstiel School alumnus. "However, this human-induced signal on weather patterns is much harder to identify."

The North Atlantic Oscillation, the result of fluctuations in air pressure across the Atlantic, affects weather by influencing the intensity and location of the jet stream. This oscillation has a strong effect on winter weather in Europe, Greenland, the northeastern U.S. and North Africa and the quality of crop yields and productivity of fisheries in the North Atlantic.

The researchers used multiple large climate model ensembles, compiled by researchers at the National Center for Atmospheric Research, to predict the North Atlantic Oscillation. The analysis consisted of 269 model runs, which is over 14,000 simulated model years.

The study, titled "NAO Predictability from External Forcing in the Late Twentieth Century," was published on March 25 in the journal npj Climate and Atmospheric Science. The study's authors include: Klavans, Amy Clement and Lisa Murphy from the UM Rosenstiel School, and Mark Cane from Columbia University's Lamont-Doherty Earth Observatory. 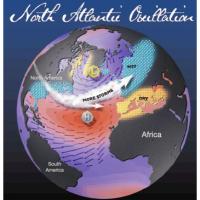