The Amazon rainforest is teeming with creatures unknown to science--and that's just in broad daylight. After dark, the forest is a whole new place, alive with nocturnal animals that have remained even more elusive to scientists than their day-shift counterparts. In a new paper in Zootaxa, researchers described two new species of screech owls that live in the Amazon and Atlantic forests, both of which are already critically endangered.

"Screech owls are considered a well-understood group compared to some other types of organisms in these areas," says John Bates, curator of birds at the Field Museum in Chicago and one of the study's authors. "But when you start listening to them and comparing them across geography, it turns out that there are things that people hadn't appreciated. That's why these new species are being described."

"Not even professional ornithologists who have worked on owls for their entire lives would agree about the actual number of species found in this group, so a study like ours has been awaited for a really long time," says Alex Aleixo, head of the research team responsible for the study, and currently curator of birds at the Finnish Museum of Natural History in the University of Helsinki, Finland.

The newly-discovered screech owls are cousins of the Eastern Screech Owls that are common in the United States. "They're cute little owls, probably five or six inches long, with tufts of feathers on their heads," says Bates. "Some are brown, some are gray, and some are in between." Until this study, the new species were lumped together with the Tawny-bellied Screech Owl and the Black-capped Screech Owl, which are found throughout South America.

Teasing out the differences between the species started with years of fieldwork in the Amazon rainforest as well as the Atlantic forest running along the eastern part of Brazil and surrounding countries. Bates, who usually conducts fieldwork during the day, says that doing fieldwork in the rainforest at night comes with new challenges. "For me it's more a feeling of fascination than being scared, but at the same time, you're running into spider webs. If you're wearing a headlight you see the eyeshine of the nocturnal animals. One time I was stepping over a log and I looked down and there was a tarantula the size of my hand just sitting there," says Bates. "If I had been a kid I would have been scared to death."

The owls that the researchers were looking for live in the trees, often a hundred feet above the forest floor. That makes studying them difficult. But the researchers had a secret weapon: the screech owls' namesake screech.

"To draw the birds out, we used tape recordings," explains Bates. "We'd record their calls and then play them back. The owls are territorial, and when they heard the recordings, they came out to defend their territory."

The scientists compared the birds' calls and found that there were variations in the sounds they made, indicative of different species. They also examined the birds' physical appearances and took tissue samples so they could study the owls' DNA at the Field Museum's Pritzker DNA Lab.

Altogether, 252 specimens, 83 tape-recordings, and 49 genetic samples from across the range of the Tawny-bellied Screech Owl complex in South America were analyzed. A significant number of specimens were collected by the research team itself, especially the study's lead author Sidnei Dantas, who spent a good share of his time in graduate school searching for and tape-recording screech owls in South American rainforests. In addition, natural history collections and their materials collected over the centuries were essential to complete the study´s unprecedented sampling.

"The study would not have been possible if it were not for the great biological collections in Brazil and USA which I visited during my work, and that sent us essential material, either genetic and morphological. This highlights the importance of such research institutions for the progress of science and hence of the countries they represent," says Dantas, who conducted the study as part of his PhD dissertation at the Goeldi Museum in Belém and is currently working as a nature guide in Brazilian Amazonia.

The combination of genetic variation, physical differences, and unique vocalizations led the team to describe two new species in addition to the previously known Tawny-bellied Screech Owl: the Xingu Screech Owl and the Alagoas Screech Owl. The Xingu owl's scientific name is in honor of Sister Dorothy May Stang, an activist who worked with Brazilian farmers to develop sustainable practices and fight for their land rights; its common name is for the area where the owl is found near the Xingu River. The Alagoas owl's name is a reference to the northeastern Brazilian state of Alagoas where the owl is primarily found.

While the owls are new to science, they're already in danger of disappearing forever. "Both new species are threatened by deforestation," says Jason Weckstein, associate curator of Ornithology in the Academy of Natural Sciences of Drexel University and associate professor in the university's Department of Biodiversity, Earth, and Environmental Science. "The Xingu Screech Owl is endemic to the most severely burned area of the Amazon by the unprecedented 2019 fires, and the Alagoas Screech Owl should be regarded as critically endangered given the extensive forest fragmentation in the very small area where it occurs," says Weckstein, who is a co-author and began work on this project as a postdoctoral researcher at the Field Museum.

Bates says he hopes that the study will shed light on how varied the Amazon and Atlantic forests are and how simply protecting certain areas isn't enough to preserve the forests' biodiversity. "If you just say, 'Well, you know Amazonia is Amazonia, and it's big,' you don't end up prioritizing efforts to keep forests from being cut in these different parts of Amazonia. That could mean losing entire faunas in this region," says Bates.

In addition to the study's conservation implications, the authors highlight the international collaboration that made the work possible. "This study shows how important it is to train the next generation of scientists at a global level," says Bates. "That means to having students like Sidnei come from Brazil and work in the Field's Pritzker Lab and measure specimens in our collection for their research. It's a great thing to build those connections." 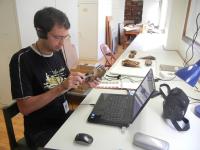