Deep in the ocean, where sunlight barely reaches, Smithsonian scientists and a team of collaborators have discovered one of the blackest materials known: the skin of certain fish. These ultra-black fish absorb light so efficiently that even in bright light they appear to be silhouettes with no discernible features. In the darkness of the ocean, even surrounded by bioluminescent light, they literally disappear.

In the July 16 issue of the journal Current Biology, a team of scientists led by Smithsonian's National Museum of Natural History research zoologist Karen Osborn and Duke University biologist Sönke Johnsen report on how a unique arrangement of pigment-packed granules enables some fish to absorb nearly all of the light that hits their skin, so that as little as 0.05% of that light is reflected back. Mimicking this strategy could help engineers develop less expensive, flexible and more durable ultra-black materials for use in optical technology, such as telescopes and cameras, and for camouflage, Osborn said.

Osborn first became interested in fish skin when she tried to photograph some striking black fish she and her colleagues caught in trawl nets used to sample the deep sea. Despite sophisticated equipment, she said, she could not capture any detail in the images. "It didn't matter how you set up the camera or lighting--they just sucked up all the light."

Careful measurements in the laboratory confirmed why cameras could not capture their features: Many of the black fish found in the deep sea absorbed more than 99.5% percent of the light that hit their surfaces. That means they are ultra-black--blacker than black paper, blacker than electrical tape, blacker than a brand-new tire. And in the deep, dark sea, where a single photon of light is enough to attract attention, that intense blackness can improve a fish's odds of survival.

Because sunlight does not reach more than a couple hundred meters beneath the ocean's surface, most deep-sea creatures make their own light, called bioluminescence. Bioluminescent glows are used to attract mates, distract predators and lure prey. They can also expose nearby animals--foiling a predator's stealthy approach or shining a beacon on potential prey--unless those animals have the right camouflage. "If you want to blend in with the infinite blackness of your surroundings, sucking up every photon that hits you is a great way to go," Osborn said.

The near-complete light absorption of ultra-black fish depends on melanin, the same pigment that colors and protects human skin from sunlight. Osborn and her colleagues discovered that this pigment is not just abundant in the skin of ultra-black fish, it is distributed in a unique way. Pigment-filled cellular compartments called melanosomes are densely packed into pigment cells and these pigment cells are arranged very close to the surface of an ultra-black fish's skin in a continuous layer. The size, shape and arrangement of the melanosomes cause them to direct any light they do not immediately absorb toward neighboring melanosomes within the cell, which then suck up the remaining light.

"Effectively what they've done is make a super-efficient, super-thin light trap," Osborn said. "Light doesn't bounce back; light doesn't go through. It just goes into this layer, and it's gone."

"These pigment-containing structures are packed into the skin cells like a tiny gumball machine, where all of the gumballs are of just the right size and shape to trap light within the machine," said Alexander Davis, a co-author of the study and doctoral student in biology at Duke University.

Fish are not the only animals known to trap enough light to produce an ultra-black surface. Ultra-black feathers and scales have been found on a few birds and some butterflies, where they contrast with brightly colored regions, making the colors appear more vibrant. Those animals produce the effect by combining a layer of melanin with light-capturing structures like tiny tubes or boxes. In the resource-limited deep sea, ultra-black fish appear to have evolved a more efficient system, Osborn said. "This is the only system that we know of that's using the pigment itself to control any initially unabsorbed light." This melanosome-based ultra-blackness seems to be a common strategy in the deep sea: Osborn and her team found the same distinct patterns of pigment in 16 species of distantly related fish.

Adopting this efficient design strategy could improve the manufacture of ultra-black materials, which currently use an architecture more like what is found in ultra-black birds and butterflies, Osborn said. Such materials, sought after for sensitive optical equipment, are currently both extremely delicate and expensive to produce. "Instead of building some kind of structure that traps the light, if you were to make the absorbing pigment the right size and shape, you could achieve the same absorption potentially a lot cheaper and [make the material] a lot less fragile," she said.

Funding and support for this research were provided by the Smithsonian, Duke University, the National Oceanic and Atmospheric Administration and the Department of Defense's National Defense Science and Engineering Graduate Fellowship. 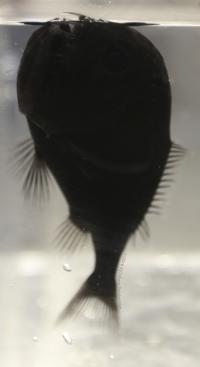 One Specimen of the Ultra-Black Fish Species Anoplogaster cornuta 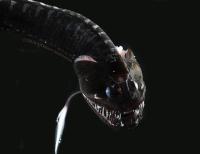