At Japan Advanced Institute of Science and Technology, researchers have successfully established relationships between games and law of motions in mind through analogy of physics and game refinement theory.

Establishing several physics quantities (such as mass, speed, and acceleration) relative to the game progress model allowed for the player's entertainment experiences for a specific game to be determined through the Newtonian laws of motion, specifically the Force, Momentum, and Potential Energy. Such a law of motion reveals the feeling of a player in their mind. Mapping different games originated from different cultures to the state of the human mind; a measure of sophistication that leads to a natural yet pleasurable experience.

Uncovering the fundamental mechanisms of game playing mechanisms had been the primary goal in the IIDA laboratory. Game refinement theory is the fruit of labor for several years--the relationships between game progress and entertainment experience from the perspective of game design. Several sub-branch of the study had been explored through board games (e.g., Chess, Go, etc.), sports (e.g., Basketball, Table tennis, etc.), and video game (e.g., action games). From a non-game context had also been previously explored (such as business, education, and loyalty programs). Interestingly, all of those studies found that game refinement measure converges to approximately similar "zone" value (a region named as the noble uncertainty).

Based on the notion of the uncertainty of the game outcome and gamified experience, several models have been introduced to fundamentally capture the essence of game playing in a variety of contexts. The move selection model and scoring model were established for the board games and sports, via the ratio of solved uncertainty over the game's length. Hence, the game refinement (GR) measure can be obtained concerning the magnitude of gravitational acceleration felt in mind. Then, the notion of speed in the game was established. The difficulty of solving the outcome uncertainty defines mass in mind. With mass, speed, and acceleration, the Newtonian laws of motion can be analogously measured, which mainly reflects motion in mind. Through games, the level of engagement, thrills, and competitiveness, can be successfully illustrated according to the interplays of the momentum, energy, and force in the game. The third derivative of the game progress model is also demonstrated from the jerk quantity (a derivative of acceleration), which is an essential measure in mechanical engineering and influences the force quantity, where the notion of effort, achievement, and discomfort felt in our mind is established.

"It is exciting to understanding how people think and feel inside (mind and body) when playing game, and it is especially curious as to why most game revolves around the established 'zone' value."

Hiroyuki Iida, Trustee and Vice President for Educational and Student Affairs,
Head of IIDA Laboratory, and Director of the Research Center for Entertainment Science,
Japan Advanced Institute of Science and Technology

Under the guidance of Dr. Mohd Nor Akmal Khalid and Prof. Hiroyuki Iida, colleagues in Research Center for Entertainment Science, as well as various interactions between current and previous students, the research frameworks through the game refinement theory had successfully been established as a multidisciplinary and emerging research field for design and analysis of games.

At present, the IIDA laboratory opened its arm to various multi-national students from multiple backgrounds. Also, current design and development are focused on expanding the notion of game refinement theory to a variety of game types, related fields of education, business, engineering, system design, artificial intelligence in games, search algorithms, and many more.

"The establishment of the link between game refinement theory and flow theory is a start, where we hope the current framework will open-up more opportunity for collaboration and at the same time generalizes as a cross-disciplinary field while contributes to the society at large in a more meaningful ways. At present, most work is still fundamental in nature."

Using games to study law of motions in mind 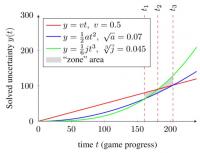