More Americans are using mobile devices and other technologies to track some aspect of their health at home, from diet and exercise to sleep patterns to bloodwork.

Because people who are blind or have low vision are more likely to have health problems such as obesity or diabetes, it's especially important that mobile health (mHealth) applications -- health tracking sensors that connect with smartphone apps -- work for those users.

Yet University of Washington researchers who conducted the first academic review of nine mHealth applications on the market in March 2014 found none met all the criteria that would make them fully accessible to blind customers.

In a paper published in the 2015 issue of the Journal on Technology & Persons with Disabilities, they investigated nine common iPhone mHealth applications that upload data from blood pressure and blood sugar monitoring devices. Accessibility shortcomings ranged from improperly labeled buttons to confusing layouts that don't work well with iPhone VoiceOver or Android TalkBack services that "read" information on the phone screen.

"We wanted to see if these health applications would be out-of-the-box accessible, and most really weren't," said lead author Lauren Milne, a UW computer science and engineering doctoral student. "They made a lot of amateur mistakes that people make when they build apps."

"It wouldn't have been hard to make their apps accessible by making that a priority in the first place. They could have been heroes from the get-go," said senior author Richard Ladner, a UW computer science professor who leads multiple projects to make technologies more broadly accessible.

They developed seven criteria for making apps accessible to low-vision users, borrowing from Apple's guidelines to help app developers take advantage of the phone's built-in accessibility capabilities and accessibility standards which technologies purchased by the federal government must meet.

Those include buttons that are programmed correctly to tell a user what to do with them, hints that help with navigation and grouping items so they make sense to screen readers that tell blind users what icon their finger is on or describe aloud what's happening on the screen.

Those typically "read" from the top left to the bottom right of a screen. If an app hasn't been laid out with the iPhone's VoiceOver program in mind, for example, a blood pressure reading of 120 mmHg over 70 mmHg and a heart rate of 80 beats per minute taken on Sept. 28 might be communicated to someone who can't see as "120, 70, 80, September 28, mmHg, mmHg, beats/minute."

At the time that the mHealth apps were tested in March 2014, one blood glucose monitoring app -- the Glooko Logbook -- met all of the accessibility criteria except for one. The other apps failed to meet at least half the accessibility guidelines. The study did not examine other accessibility features such as the ability to zoom or the use of large or high-contrast print, and researchers say it's possible manufacturers have made accessibility upgrades to more recent versions of the apps.

In fact, when app developers simply "borrowed" standard iPhone operating system elements, the products were more accessible, the researchers found. When they designed custom elements, they rarely included the necessary information to make them work with screen readers that assist low-vision users.

"If people just used the basic widgets and things that Apple provides, they'd have better results," said Ladner. "But the number of app developers has increased, and most of them are thinking about trying to make things pretty. They're not thinking about all the users." 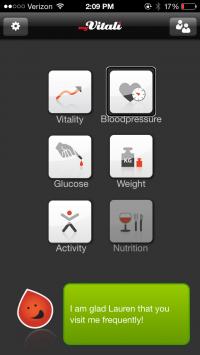