An international team, including a Cardiff University researcher, who previously found evidence of the Earth's earliest tree, has gone one step further.

The research team has now unearthed and investigated an entire fossil forest dating back 385 million years.

The Gilboa fossil forest, in the Catskill Mountains in upstate New York, is generally referred to as 'the oldest fossil forest'. Yet by scientific standards it has remained mythical.

Fossils of hundreds of large tree stumps (the 'Gilboa tree') preserved in the rocks were discovered in the 1920's during excavation of a quarry to extract rock to build the nearby Gilboa Dam. Only sketchy information was recorded about the geological context of the fossil stumps, the soil the trees were growing in, and the spacing of trees bases. Following completion of the dam the quarry was backfilled. Until now, the only way the Gilboa fossil forest could be investigated was from museum specimens and from small exposures of other levels in nearby streams.

In May 2010, the quarry was partially emptied as part of a dam maintenance project. Researchers were monitoring the site with contractors, Thalle Construction Company and the New York City Department of Environmental Protection. Professor Bill Stein, Binghamton University and Frank Mannolini, New York State Museum spotted that the original quarry floor had been exposed, and that the roots and positions of the trunk bases had been preserved.

Dr Chris Berry, Cardiff School of Earth and Ocean Sciences explains: "For the first time we were able to arrange for about 1,300 square meters to be cleaned off for investigation. A map of the position of all the plant fossils preserved on that surface was made."

The researcher's findings are published in the journal Nature (1st March). They describe bases of the 'Gilboa trees' as spectacular bowl-shaped depressions up to nearly two meters in diameter, surrounded by thousands of roots. These are known to be the bases of trees up to about 10 meters in height, that looked something like a palm tree or a tree fern. One of the biggest surprises was that the researchers found many woody horizontally-lying stems, up to about 15 cm think, which they have demonstrated to be the ground-running trunks of another type of plant [aneurophytalean progymnosperm], only previously known from its upright branches. They also found one large example of a tree-shaped club moss, the type of tree that commonly forms coal seams in younger rocks across Europe and North America.

Dr Berry said: "All this demonstrates that the 'oldest forest' at Gilboa was a lot more ecologically complex than we had suspected, and probably contained a lot more carbon locked up as wood than we previously knew about. This will enable more refined speculation about the way in which the evolution of forests changed the Earth.

"Personally, the chance to walk on that ancient forest floor, and to imagine the plants that I have been studying as fossils for more than 20 years standing alive in the positions marked by their bases, was a career highlight. Seven years ago colleagues Linda and Frank found us a fossil of a complete Gilboa tree. That was amazing. But this time we've got the whole forest!" 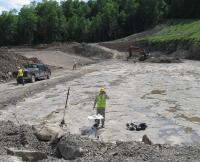