BLOOMINGTON, Ind. -- At a time when the video game industry has come under scrutiny for its low level of female employment and how women are depicted in its products, a new Indiana University study finds that sexualization of female primary game characters actually may be less than before.

The study, based on an analysis of in-game content from 571 titles released between 1983 and 2014, reported that this trend may have begun nearly 10 years ago, potentially as a combined result of increased criticism of how female characters were being presented and greater interest among women in playing and developing video games.

"What my colleagues and I decided to do was to look at whether the trend of sexualizing female characters was stable over time, whether it's always existed and whether we'd see any changes as a consequence of some of the livelier social media conversations that have been happening and some of the critiques levied at the gaming industry," said Teresa Lynch, a Ph.D. candidate in The Media School at IU and the study's lead author.

"We found that in essentially the last eight years, there has been a significant decrease in the sexualization of female characters," Lynch said.

However, when women were depicted as secondary characters in games, they continued to be sexualized to a much greater degree.

The findings also indicate that parents relying on ESRB ratings for guidance in selecting content for their children may find more sexual content than expected in "Teen" rated games. The researchers found no difference in sexualization of female characters in games rated by the ESRB ratings board as "Teen," for players aged 13-17, and "Mature," for players 18 and older. The ESRB ratings are given by parents and caregivers, rather than from the game industry itself.

"In a way this suggests that people have become so accustomed to seeing sexualized women in video games that it's so 'normal,' they don't think of it as something that might be objectionable for young children," Lynch said.

This is the first study to look at female characters in actual game play and over the entire history of their appearance in games.

Lynch and her co-authors, Niki Fritz, Jessica E. Tompkins and Irene I. van Driel, who are also doctoral students in The Media School, found a pattern of change in sexualization over time that indicates the industry may have reacted to its critics.

Their article, "Sexy, Strong, and Secondary: A Content Analysis of Female Characters in Video Games across 31 Years," appears in the August issue of the Journal of Communication, published by the International Communication Association.

Although mainstream video games have been in existence since the early 1970s, the first playable female character did not appear in a video game until 1983, in Atari's "Dishaster." While early female characters were often alluring in concept or cover art, they typically appeared in games as an 8-bit "sprite," lacking the advertised physical features. This was the primary reason the researchers chose to examine characters as they appear within the game.

"Advertisements, for instance, seem to exaggerate characters' physical features in ways that aren't always consistent with how they appear in the gameplay," said Lynch, the study's lead author.

"In the 1980s and early 1990s, a lot of the graphical integrity just didn't allow for the characters to be sexualized," she added. "When we fast-forward to the next generation of consoles, which happened in the early to mid-1990s, we see the transition to 3-D graphics, and that's when we saw a big spike in the sexualization of female characters. That continued its upward trajectory through the early 2000s and then, suddenly, we saw a decrease."

Previous studies have provided narrower snapshots of how women have been underrepresented and sexually objectified in games at specific points in time or only among top-selling games. They have also focused on how women are portrayed in packaging or advertising.

"We wanted to specifically look at playable female characters because those are the characters that players spend the most time with," Lynch said. "When there's a concern about the negative influence of content on people, generally you'd want to look at what players are most often encountering. By looking at the characters in game, we were going to get a better idea about whether there are sexist or objectifying portrayals that may be contributing to the formation of negative attitudes about women more generally."

The paper said the popularity of Lara Croft in the 1996 game "Tomb Raider" may have served as a catalyst for video game developers to begin creating more sexualized female characters to boost sales among men and boys, the predominant audience at the time.

Lynch said given the findings of earlier studies, which suggested broad and extreme sexualization and stereotyping of female characters, she and her colleagues were surprised by their findings. Sexualization was lower across all years than the researchers had anticipated, and the decline in recent years was steeper than expected. Lynch said these findings possibly stem from how much broader the video game market is than in the past, although she also noted that there continue to be extremes when it comes to game characters.

"But there are also a lot of characters who are in keeping with more feminist notions of what a powerful, non-objectified woman would look like," she said. "The remake of the Tomb Raider series and Lara Croft's redesign is an excellent example of the way the industry is now humanizing female characters."

The IU researchers also found that many games depict women more often in secondary roles and sexualized them more than the female characters who are cast in primary roles.

"When we found they were secondary to a male protagonist, they were more often sexualized," Lynch said. "This is essentially pointing to the objectification of the character, that the female characters who were secondary don't have as many important artifacts built into their character, like personality, a backstory or meaningful interaction with other characters.

"As a consequence, because we're seeing that they're sexualized, that renders them to the status of a sexual object, that they're no longer a full person with feelings and a range of emotion," she added. "They're there because they are eye candy."

Other studies have found that women prefer playing role-playing games, or RPGs, over action games, which many male players prefer. The IU study found that female characters in role-playing games tended to be less sexualized than in action and fighting games. This finding may help explain some of the gender divide that exists for consumers; the relatively lower sexualization in RPGs implies that content creators are sensitive to the concerns of female players.

In order for the video game industry to attract more women, both as developers and as players, it needs to continue to be sensitive to the issue of sexualization of women. "For this study, we aren't trying to suggest that female characters shouldn't ever be sexy," Lynch said. "Sexuality and physical attractiveness are important parts of women's identities, and many women and men enjoy playing as sexy characters in games as long as the context makes sense. But when you have a male character in body armor and a female character in a bikini fighting side by side, it's hard for women not to feel trivialized and objectified."

"When women are interested in gaming, they tend to spend far more time playing games than men. When it's central to their identity, they're more protective of what it means to be a gamer. So women are an important part of the core culture of gaming," she said. "Continuing to show one-dimensional portrayals of female characters and dismiss concerns about the way female characters are portrayed just doesn't make good business sense.

"For women and girls, especially, to feel like the content is for them, that they're the intended audience, they need to be seeing people who are like them, either in the game or playing the game," Lynch said. "As more women have joined the industry as professionals, and men have seen hypersexualization and objectification of women in media as a legitimate concern, I think we'll continue to see better and more varied representations of women in games. In turn, I think more girls will have their interest in gaming piqued."

For a copy of the paper, click on the link below or contact George Vlahakis at IU Communications at 812-855-0846 or vlahakis@iu.edu. 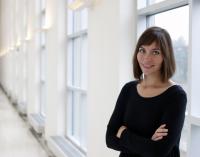