A team led by University of Arizona researchers is taking a new, patient-directed approach to treating pancreatic cancer. Rather than relying on conventional cell lines that have defined effective drug targets for other types of cancers, they are creating and sequencing cell lines from a cancer patient's own tissue. Their results, outlined August 4 in Cell Reports, reveal that pancreatic tumors are more varied than previously thought and that drug sensitivity is unique to each patient.

"Currently there are no targeted therapies directly against the hallmark mutations common in pancreatic cancer, and each patient derived model we tested had its own unique therapeutic sensitivities," says author Erik Knudsen, a professor of medicine at the University of Arizona Cancer Center. "I'd say that's why many pancreatic cancer clinical trials fail; it's that expectation that most tumors will respond in the same way to a drug."

In the study, the team turned to a library of cancer drugs, representative of what's available to patients, and tested each individually against a panel of different cell lines: either conventional pancreatic cell lines, which are often used by researchers and pharmaceuticals, or cell lines that the team developed directly from cancer patients. While conventional pancreatic cell lines were more sensitive to standard drugs used in pancreatic cancer treatment, cell lines from patients were not, with only a "handful" responding to any single-agent treatment.

"There are reasons why the response might have been so poor," says corresponding author Agnieszka Witkiewicz, a professor of pathology and medicine at the University of Arizona. Typically, personalized medicine relies on genome sequencing, using a patient's tumor DNA to determine the mutations that cancer drugs can target. However, mutations that lead to cancer are complex given that some can override others, making a singular mutation hard to target. Combination therapy--using several different cancer treatments in conjunction--can solve this problem, but determining which drugs to use and in what doses requires models that replicate the genetics of the individual patient's tumor.

Development of cell lines directly from patients can be challenging; it's time consuming and requires appropriate authentication in relation to the tumor from which the cell lines were derived. Unfortunately, for most commonly used cell lines, the patient's tumor was never fully characterized genetically, and the cell lines were not monitored for changes over time. As shown in this study, these difficulties can be overcome, and new models that better reflect a patient's cancer can be developed.

"There's a bit of frustration with the current personalized medicine approach," says Knudsen. "If you sequence a hundred tumors from patients in the clinic, you might be able to treat one or two patients with the resulting information, because of the nature of pancreatic cancer genetics. Using new, patient-derived models fills in the gap for us and lets us guide our therapies with functional sensitivities to drugs, not with preconceived notions."

"Pancreatic cancer is particularly challenging to treat," says Witkiewicz. "Since there are no early detection tests, the majority of patients present with advanced disease. By that time, the tumor has accumulated multiple genetic changes selecting for resistance to many therapies."

Both researchers stressed that testing the cell lines from larger amounts of patients is key in advancing pancreatic cancer treatment. Disease models that are derived from a single patient with the patient's specific mutations are also necessary to test the therapies derived from genomic sequencing before moving on to the patient. Both researchers agreed that clinical trials that incorporate a drug-screened patient model will be critical for improving patients' outcomes.

"The path forward in studying pancreatic cancer is one that marries genetic analysis while also functionally analyzing drug sensitivities," says Knudsen. "This isn't a part of any conventional trial design in pancreatic cancer today."

"All of our work is about the patients at the end of the day--it's about a disease where standard approaches repeatedly have failed and patients really need hope," adds Witkiewicz. "I think this work seeds new ideas for changing the paradigm for the treatment of pancreatic cancer-- especially when there are so many failed trials. It will take a concerted effort from all of us, in academia, in pharma, in the clinic--everywhere."

The research was supported by the National Institutes of Health. 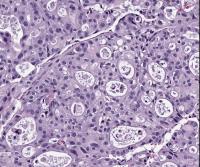