HOUSTON - (June 22, 2021) - We can't detect them yet, but radio signals from distant solar systems could provide valuable information about the characteristics of their planets.

A paper by Rice University scientists describes a way to better determine which exoplanets are most likely to produce detectable signals based on magnetosphere activity on exoplanets' previously discounted nightsides.

The study by Rice alumnus Anthony Sciola, who earned his Ph.D. this spring and was mentored by co-author and space plasma physicist Frank Toffoletto, shows that while radio emissions from the daysides of exoplanets appear to max out during high solar activity, those that emerge from the nightside are likely to add significantly to the signal.

This interests the exoplanet community because the strength of a given planet's magnetosphere indicates how well it would be protected from the solar wind that radiates from its star, the same way Earth's magnetic field protects us.

Planets that orbit within a star's Goldilocks zone, where conditions may otherwise give rise to life, could be deemed uninhabitable without evidence of a strong enough magnetosphere. Magnetic field strength data would also help to model planetary interiors and understand how planets form, Sciola said.

The study appears in The Astrophysical Journal.

Earth's magnetosphere isn't exactly a sphere; it's a comet-shaped set of field lines that compress against the planet's day side and tail off into space on the night side, leaving eddies in their wake, especially during solar events like coronal mass ejections. The magnetosphere around every planet emits what we interpret as radio waves, and the closer to the sun a planet orbits, the stronger the emissions.

Astrophysicists have a pretty good understanding of our own system's planetary magnetospheres based on the Radiometric Bode's Law, an analytical tool used to establish a linear relationship between the solar wind and radio emissions from the planets in its path. In recent years, researchers have attempted to apply the law to exoplanetary systems with limited success.

"The community has used these rule-of-thumb empirical models based on what we know about the solar system, but it's kind of averaged and smoothed out," Toffoletto said. "A dynamic model that includes all this spiky behavior could imply the signal is actually much larger than these old models suggest. Anthony is taking this and pushing it to its limits to understand how signals from exoplanets could be detected."

Sciola said the current analytic model relies primarily on emissions expected to emerge from an exoplanet's polar region, what we see on Earth as an aurora. The new study appends a numerical model to those that estimate polar region emissions to provide a more complete picture of emissions around an entire exoplanet.

"We're adding in features that only show up in lower regions during really high solar activity," he said.

It turns out, he said, that nightside emissions don't necessarily come from one large spot, like auroras around the north pole, but from various parts of the magnetosphere. In the presence of strong solar activity, the sum of these nightside spots could raise the planet's total emissions by at least an order of magnitude.

"They're very small-scale and occur sporadically, but when you sum them all up, they can have a great effect," said Sciola, who is continuing the work at Johns Hopkins University's Applied Physics Laboratory. "You need a numerical model to resolve those events. For this study, Sciola used the Multiscale Atmosphere Geospace Environment (MAGE) developed by the Center for Geospace Storms (CGS) based at the Applied Physics Laboratory in collaboration which the Rice space plasma physics group.

"We're essentially confirming the analytic model for more extreme exoplanet simulations, but adding extra detail," he said. "The takeaway is that we're bringing further attention to the current model's limiting factors but saying that under certain situations, you can get more emissions than that limiting factor suggests."

He noted the new model works best on exoplanetary systems. "You need to be really far away to see the effect," he said. It's hard to tell what's going on at the global scale on Earth; it's like trying to watch a movie by sitting right next to the screen. You're only getting a little patch of it."

Also, radio signals from an Earth-like exoplanet may never be detectable from Earth's surface, Sciola said. "Earth's ionosphere blocks them," he said. "That means we can't even see Earth's own radio emission from the ground, even though it's so close."

Detection of signals from exoplanets will require either a complex of satellites or an installation on the far side of the moon. "That would be a nice, quiet place to make an array that won't be limited by Earth's ionosphere and atmosphere," Sciola said.

He said the observer's position in relation to the exoplanet is also important. "The emission is 'beamed,'" Sciola said. "It's like a lighthouse: You can see the light if you are in line with the beam, but not if you are directly above the lighthouse. So having a better understanding of the expected angle of the signal will help observers determine if they are in line to observe it for a particular exoplanet."

Co-authors of the paper are Rice graduate student Alison Farrish and David Alexander, a professor of physics and astronomy and director of the Rice Space Institute, and computational physicist Kareem Sorathia and physicist Viacheslav Merkin at the Johns Hopkins Applied Physics Laboratory.

The National Science Foundation and NASA supported the research.

This news release can be found online at https://news.rice.edu/2021/06/22/nightside-radio-could-help-reveal-exoplanet-details/

Rice University graduate student Anthony Sciola, pictured at Kaldidalur (The Cold Valley) in Iceland, has developed a numerical model to enhance the analysis of radio signals from exoplanets. Though the instruments to obtain such data are not yet available, they could help determine what planets have protective magnetospheres. (Credit: Courtesy of Anthony Sciola)

Rice University scientists have enhanced models that could detect magnetosphere activity on exoplanets. The models add data from nightside activity that could increase signals by at least an order of magnitude. In this illustration, the planet's star is at top left, and the rainbow patches are the radio emission intensities, most coming from the nightside. The white lines are magnetic field lines. (Credit: Anthony Sciola/Rice University) 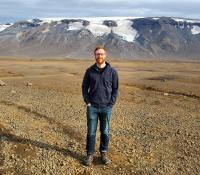