(Millbrook, NY) Anyone that has spent time at a seaside pier has witnessed the destruction barnacles wreak on boat hulls. But biofouling animals are not limited to marine environments. A new paper published in the journal Frontiers in Ecology and the Environment estimates that the global management of freshwater mussels, clams, and other clinging animals costs $277 million U.S. dollars annually.

Biofoulers are organisms that accumulate underwater on hard surfaces, to the detriment of property and economically important activities, such as shipping, power generation, and water treatment. While plants and algae can act as freshwater biofoulers, the study focused on the impact of animals. Eleven groups known to cause problems were investigated, among them mussels, clams, snails, crustaceans, sponges, and insects.

David Strayer is a freshwater ecologist at the Cary Institute of Ecosystem Studies and one of the paper's authors. "A lot of attention has been given to marine biofouling because it costs a ton of money. Less is known about freshwater impacts. We found most of the economic burden is currently shouldered by utilities. Hydroelectric power plant cooling systems and water treatment intake pipes are particularly vulnerable to damages."

Many freshwater biofoulers are filter-feeders. These animals readily colonize pipes and channel walls, where they collect food from the passing water. Coverage can be extensive. When water treatment intake pipes and filters clog, water flow is obstructed, hastening the corrosion of costly infrastructure. Infestation in hydroelectric power station channels decreases the efficiency of water flow used for power generation.

Management has involved keeping biofoulers out, keeping their numbers low, and killing off infestations. Specialized filters can stop animals from entering facilities that rely on untreated water. To prevent accumulation on hard surfaces, copper alloys, anti-fouling coatings, and ultraviolet light are among the methods used. At water treatment plants and power stations repelling chemicals like chlorine and mechanical cleaning are the most common controls.

Strayer notes, "There are a cornucopia of strategies to combat biofoulers, but most are either costly, or come with the price of polluting water and poisoning non-target organisms."

Given our increasing demand for water and electricity, without action the problem is likely to intensify. First author Daisuke Nakano of Japan's Central Research Institute of Electric Power writes, "Impacts of freshwater biofoulers may soon increase as humans inadvertently move these species around the world, as global demand for freshwater rises, and as human activities favor biofouling species by providing them with suitable habitat."

New water treatment plants and power stations will be susceptible to biofouling. And nutrient pollution and climate change may favor biofoulers. Filter-feeding biofoulers – among the most costly – thrive in the nutrient-rich waters common in developed areas, where they establish on engineered surfaces like concrete walls. Climate warming may increase the range of biofouling animals that are limited by cold temperatures.

In North America, the most troublesome biofoulers include zebra mussels, quagga mussels, Asian clams, and New Zealand mud snails. Strayer notes, "A common theme among these biofoulers is that they are non-native. They are also easily transported on boats and in ballast water. This is a worrisome pattern we are seeing around the world."

Preventing the next global hitchhiker will require vigilance. Strayer stresses that, "Our $277 million dollar estimate is extremely conservative. Right now there is very little research on impacts to freshwater shipping, recreation, and irrigation, or the costs associated with altered freshwater habitat or for biofoulers other than animals. We fully expect the number to rise."

Recommendations include research into understudied freshwater biofoulers, such as sponges and insects, as well as a better understanding of how biofoulers interact with one another, as it is common for multiple species to coexist. Also highlighted is the need for control methods that are both effective and environmentally sensitive, and additional studies on the ecological impacts of biofouler invasions.

When dealing with established biofoulers, improved management is critical. But prevention is the most effective tool. Nakano writes, "At the end of the day, we need education, regulation, and legislation designed to minimize the unintentional global transport of biofouling species."

The Cary Institute of Ecosystem Studies is a private, not-for-profit environmental research and education organization in Millbrook, N.Y. For thirty years, Cary Institute scientists have been investigating the complex interactions that govern the natural world. Their objective findings lead to more effective policy decisions and increased environmental literacy. Focal areas include air and water pollution, climate change, invasive species, and the ecological dimensions of infectious disease. 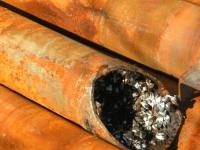