Comprising more than 17,000 islands, the Indonesian archipelago is one of the world's most biodiverse places on Earth.

Sponges, aquatic organisms whose bodies consist of numerous pores to allow the ingress of water, are key components of this richness and play a fundamental role in the survival of coral reef habitats. Furthermore, they are also known for their medicinal benefits.

Unfortunately, due to the paucity of taxonomic expertise, the sponges from the Indonesian reefs are often ignored in monitoring surveys and conservation programmes, while their diversity is largely underestimated.

Inspired by their extraordinary biodiversity, the researchers teamed up with the pharmaceutical company PharmaMar to conduct several expeditions in the waters of North Sulawesi Island.

The authors reported a total of 94 demosponge species belonging to 33 families living in the North Sulawesi Island. Amongst them, there are six species new to science and two previously unknown symbiotic relationships.

Seven of the recorded species were collected for the very first time since their original description.

However, these findings are still scarce, given the abundance of the sponges in similar localities in the Indonesian archipelago.

In conclusion, the authors note that the marine diversity in Indonesia is still far from being well known.

"Thanks to this impressive diversity, these areas are important spots for diving tourism and require the urgent development of sustainable tourism practices," they say. 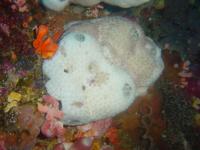 One of the New Sponge Species