In 1880, the picturesque Swedish island of Stora Karlsö became a nature preserve and hunting park. To help fund the venture, owners of the island began organizing tours in the 1920s. Stora Karlsö remains a popular tourist destination, attracting about 10,000 visitors each year. And that means that the colony of seabirds living on the island has had its picture taken over and over again, for almost 100 years.

Now researchers reporting in the Cell Press journal Current Biology on March 21 have used many of those photos to reconstruct the rise and fall of common guillemots, one of the largest auk species. Those data show that the guillemots suffered early in the 20th century, but their numbers have now risen to a historically high level. They also demonstrate the power of amateur photos and other unconventional sources of evidence to help fill important gaps in the scientific record.

"We found that the population is currently increasing at an unprecedented rate of about 5% annually," says Jonas Hentati-Sundberg of the Stockholm Resilience Centre at Stockholm University in Sweden. "This is interesting in that many common guillemot populations are decreasing worldwide."

Hentati-Sundberg and Olof Olsson knew that before the island received protection, local people collected guillemot eggs and also harvested adult birds. That practice ended in the late 19th century, but the birds faced other pressures over the years, including oil spills and chemical exposures. They also got tangled in some forms of fishing gear. The researchers wanted to find a way to look deeper into how all those influences changed the seabirds' population over the years.

Long-term empirical datasets are necessary to examine human impacts on marine ecosystems, but standardized scientific inquiry generally only dates back 30 to 40 years. Given the history of the island, the researchers knew there must be plenty of old photographs of the island and its seabirds. They spent about 5 years collecting images from archives, museums, and especially from people who had visited the island and photographed its main attraction: the seabird colonies.

Those photos show that today's island colony of guillemots is more than five times bigger than it was in the early 20th century. The researchers also observed a dip in seabird numbers between the 1960s and 1970s, a time when environmental contaminants such as DDT and PCB are known to have been extremely high in the Baltic Sea.

"It is reasonable to expect that contaminants had a role in the decline," Hentati-Sundberg says. "It has not been known previously that seabird populations were affected by the contaminants."

Hentati-Sundberg suggests that the current increase in the guillemot population on Stora Karlsö might trace to a combination of factors, including a ban on driftnet fishing for salmon in the Baltic Sea enacted in 2008, a decline in environmental contaminants, and an abundance of small fish that guillemots like to eat. "It will be very interesting to see how long the increase can go on," he says.

The seabirds in those photos can reveal important trends in the larger marine ecosystem. "Seabirds are both integral to the marine ecosystem and at the same time easily observed and charismatic, and therefore a kind of terrestrial messenger of sub-surface dynamics," Hentati-Sundberg says.

He says that they now want to learn more about the factors driving the rise and fall of the birds in the 20th century. In particular, they hope to find out more about the links between the seabirds and their fish prey.

Tourists at Stora Karls&ouml; in 1975 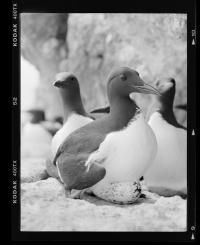