Childhood leukemia is a diagnosis that no family ever wants to endure. While the treatment of most types of leukemia has improved steadily over the years, a few specific types remain very difficult to treat. One of these is called "mixed lineage leukemia," and for children affected by this cancer, their chance of survival is only around 50 %.

A team of researchers led by Václav Veverka (IOCB Prague, Czech Republic), Zeger Debyser (KU Leuven, Belgium), and H. Courtney Hodges (Baylor College of Medicine, TX, USA) has recently uncovered a major new vulnerability of mixed lineage leukemia. Their findings, published in a recent issue of the journal PNAS, reports that a protein called LEDGF/p75 is regulated by phosphorylation, a molecular modification that changes the electrical charge of the LEDGF/p75 protein.

LEDGF/p75, or "lens epithelium-derived growth factor," is a protein that contributes to the regulation of gene expression. It does so by tethering other proteins to a specific epigenetic mark on chromatin. This chromatin tethering activity is hijacked in two important disease settings: HIV and mixed lineage leukemia. Unfortunately, until now little was known about the biological regulation of LEDGF/p75's interaction to binding partners, which limited the development of therapeutic targeting of LEDGF/p75 in human disease.

After an extensive structural analysis, the scientists uncovered molecular features crucial for interaction LEDGF/p75 with its binding partners. To their surprise, they found out that this interaction is achieved through a structurally conserved binding mode common to all of the LEDGF/p75 binding partners. This allowed them to identify previously unknown direct interactions between LEDGF/p75 and other major transcriptional regulatory factors. These factors are well known in the world of gene regulation and include major regulators such as the Mediator complex. Their findings demonstrate that LEDGF/p75 participates in a much larger network of factors involved in transcription elongation than what was previously recognized. Importantly, they also revealed for the first time that binding between LEDGF/p75 and its interaction partners are strongly modulated by phosphorylation from an enzyme called casein kinase 2.

This major breakthrough allows researchers to target LEDGF/p75 interactions, which can be used to develop entirely new therapeutic strategies against mixed lineage leukemia. In an initial proof-of-concept demonstration, the team showed that elimination of phosphorylation sites in MLL1, one of the LEDGF/p75 interaction partners, reduces the ability of leukemic cells to remain in a cancer-like state. Interestingly, this interaction is only necessary for cancer and does not appear to be needed for normal function of blood cells.

In their studies, the researchers found that inhibiting the phosphorylation that permits LEDGF/p75 and MLL1 to bind provides a promising new therapeutic route against mixed lineage leukemia. Because this interaction is specific to cancer and is not necessary for normal function, additional studies in this area may help to provide more potent and less toxic cancer therapies. "The power of structural biology is the ability to visualize the molecular interactions that contribute to human disease," Veverka says. Based on their recent discovery, the researchers hope their findings will open new possibilities to improve the odds for the young patients affected by this aggressive leukemia.

The Institute of Organic Chemistry and Biochemistry of the Czech Academy of Sciences / IOCB Prague is a leading internationally recognized scientific institution whose primary mission is the pursuit of basic research in chemical biology and medicinal chemistry, organic and materials chemistry, chemistry of natural substances, biochemistry and molecular biology, physical chemistry, theoretical chemistry, and analytical chemistry. An integral part of the IOCB Prague's mission is the implementation of the results of basic research in practice. Emphasis on interdisciplinary research gives rise to a wide range of applications in medicine, pharmacy, and other fields.

KU Leuven is Europe's most innovative university in the latest Reuters ranking. Located in Belgium, it is dedicated to research, education, and service to society. KU Leuven is a founding member of the League of European Research Universities (LERU) and has a strong European and international orientation. Its scientists conduct basic and applied research in a comprehensive range of disciplines. The university welcomes more than 50,000 students from over 140 countries. The KU Leuven Doctoral Schools train approximately 4,500 PhD students. 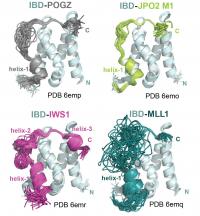 Solution Structures of the LEDGF/p75 Domain