An antisymmetric exchange known as Dzyaloshinskii-Moriya interactions (DMI) is vital to form various chiral spin textures, such as skyrmions, and permits their potential application in energy-efficient spintronic devices.

Published this week, a Chinese-Australia collaboration has for the first time illustrated that DMI can be induced in a layered material tantalum-sulfide (TaS2) by intercalating iron atoms, and can further be tuned by gate-induced proton intercalation.

Searching for layered materials that harbour chiral spin textures, such as skyrmions, chiral domain Walls is vital for further low-energy nanodevices, as those chiral spin textures are building blocks for topological spintronic devices and can be driven by ultra-low current density.

However, electrically controlling the DMI turns out to be challenging:

"Both conventional electric-field gating, and the widely-used alternative technique of ion-liquid (Li+) gating have hit stumbling blocks in the electrical control of DMI in itinerant ferromagnets, because the electric-field and Li+ can only modulate the carriers close to the surface," explains Guolin.

To address this limitation in tuning the DMI, the group at RMIT recently developed a new protonic gate technique, and successfully illustrated that DMI can be dramatically controlled by gate-induced proton intercalations.

By increasing the intercalation of protons by gate voltage, the team were able to significantly change the carrier density and further tune the DMI via the Ruderman-Kittel-Kasuya-Yosida (RKKY) mechanism, which refers to the coupling of nuclear magnetic moments.

"The observed topological Hall resistivity after proton intercalation has been increased more than four-fold under a few volts, indicating a huge increase of DMI," says co-author A/Prof Lan Wang (also at RMIT).

"The successful tuning of DMI in chiral magnet Fe-intercalated TaS2 by protonic gate enables an electrical control of the chiral spin textures as well as the potential applications in energy-efficient spintronic devices," says co-author Prof Mingliang Tian, who is a FLEET Partner Investigator and Director of the Centre's partner organisation the High Magnetic Field Laboratory (Anhui Province, China).

"Tailoring Dzyaloshinskii-Moriya interaction in a transition metal dichalcogenide by dual-intercalation" was published in Nature Communications in June 2021. (DOI: 10.1038/s41467-021-23658-z)

As well as support from the Australian Research Council, support was also provided by the National Natural Science Foundation of China, the National Key R&D Program of China, the Chinese Academy of Sciences (CAS; Youth Innovation Promotion Association and 100 Talents Program) and the High Magnetic Field Laboratory (China). 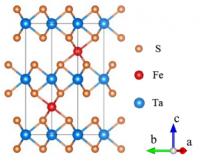