Online news stories typically have a 36 hour shelf life, according to a study by a group of physicists hailing from Notre Dame University, Lawrence Livermore National Laboratory, the Hungarian Academy of Sciences, and Harvard. While traditional print and broadcast news media are constrained by 24 hour daily schedules, visits to online news stories typically peak within a few hours and decay rapidly over the course of a day and a half. The study shows that, mathematically speaking, visits to online news stories follow a pattern in time that is similar to maps of connections between web sites and social groups. That is, visits to news stories decreased in the form of a power law - a mathematical law that turns up frequently in self organizing interactions in nature and society, which are frequently studied in a field of physics know as complexity theory. The researchers based their study on visits to a major European news site, www.origo.hu, which receives over 6.5 million hits per day. In addition to revealing the form of the decay in news story interest, the researchers confirmed that comparative interest in specific stories also varied with a power law, which in turns shows that most visitors only view the headlines of about 53% of items on a news site, and actually read only 7% of news stories.

If pebbles could talk, they might tell tales of tortuous journeys as they were transformed from jagged rock shards to smooth stones. Physicists at the University of Pennsylvania and the Institut de Geologie in France are hoping to deduce the history of a pebbles travels through streams, under glaciers, or along seashores by developing models of pebble erosion. The researchers evaluated possible models by experimentally simulating erosion with artificial pebbles made of five millimeter thick tiles of clay that were molded in various geometrical shapes including squares, triangles, and other polygons. The researchers tracked changes in the tile shapes as they tumbled on a tilted, rotating pan. The tiles sharp corners rapidly wore away, but the physicists were surprised to find that the tiles ultimately approached shapes that were not the perfect circles predicted by simple models based on the proposition that points are gradually polished down on pebbles. Instead they tended to form more intricate shapes that were almost, but not quite, circles. In addition, the final shapes are the same regardless of the artificial pebbles starting shape. More involved models that take into account the fracture of protruding points predicted final tile shapes more accurately. Although the research is in its early stages, theories of pebble erosion could soon provide clues to geological history encoded in various pebble shapes.

ItTMs a common observation that puffy cumulus clouds are often the source of sudden rain storms, while rain from smoother stratus clouds ramps up much more slowly. Experiments have confirmed many scientists speculations that the convection that gives puffy clouds their shape is also the source of the sudden showers, but only now have physicists at the Open University in England produced a theory that consistently explains the precipitation patterns. They propose that adjacent water droplets in a stable stratus cloud rarely collide with their neighbors because they move at about the same speed. Sufficiently violent turbulence in cumulous clouds, however, moves droplets at a range of speeds, which causes some to overtake others and collide to form larger drops. Once the turbulence exceeds a critical value, the large drops grow rapidly and fall as rain within a few minutes.

If you are still coming to grips with the quantum weirdness of entanglement, where two or more particles essentially become a single quantum object even though they may be in entirely different places, then hold on to your hats. Physicists at Austrias University Wien and Ã–sterreichische Akademie der Wissenschaften have experimentally demonstrated that entanglement itself can become entangled. By entangling three photons and making a measurement on one of them, the group was able to learn about the entangled state of the other two photons. Quantum entanglement, which Einstein considered spooky action at a distance, is currently being explored as a route to secure communication and quantum computing, but in the labs is usually limited to particle pairs. The authors do not speculate on specific applications of entangled entanglement, but the experiment shows at the very least that quantum mechanics is even spookier than Einstein suspected it to be. 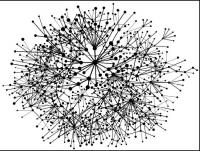