After four decades of searching, solar scientists have at long last found evidence of a type of seismic wave in our Sun, thanks to ESA (European Space Agency) and NASA's Solar and Heliospheric Observatory, or SOHO. These low-frequency waves, called g-modes, reveal that the solar core is rotating some four times faster than the solar surface.

"This is certainly the biggest result of SOHO in the last decade, and one of SOHO's all-time top discoveries," said Bernhard Fleck, ESA's SOHO project scientist based at NASA's Goddard Space Flight Center in Greenbelt, Maryland.

Just like seismologists use the way earthquakes travel through Earth's interior to study our planet's structure, solar physicists use helioseismology to study the Sun's interior structure by tracking the way waves move throughout the star. Unlike Earth, where seismic events are typically distinct, the Sun is constantly ringing with sound waves because of the continuous convection of solar material going on beneath the surface.

Scientists have long thought gravity waves, or g-waves, hold the key to studying the rotation of the Sun's core. Gravity waves are fluid waves where buoyancy acts as the restoring force, and are distinct from astronomical gravitational waves. But gravity waves are hard to find, because they have no clear signatures on the solar surface. Sound waves, also called pressure waves, or p-waves, on the other hand, are easy to detect on the solar surface, but they don't give us any information about how the Sun's core rotates.

"The solar oscillations studied so far are all sound waves, but there should also be gravity waves in the Sun, with up-and-down, as well as horizontal motions, like waves in the sea," said Eric Fossat, an astronomer at the Côte d'Azur Observatory and lead author of the paper describing the result, published in Astronomy & Astrophysics on Aug. 1, 2017. "We've been searching for these elusive g-waves in our Sun for over 40 years, and although earlier attempts have hinted at detections, none were definitive. Finally, we have discovered how to unambiguously extract their signature."

Eric and his colleagues used 16.5 years of data collected by SOHO's Global Oscillations at Low Frequencies, or GOLF, instrument. By applying various analytical and statistical techniques, they were able to pick out a regular imprint of the g-modes on the more easily detected p-modes.

In particular, they looked at a p-mode parameter that measures how long it takes for an acoustic wave to travel through the Sun and back to the surface again -- a journey known to take four hours and seven minutes. They detected a series of modulations in this p-mode parameter: the signature of g-waves shaking the structure of the Sun's core.

The imprint of these g-waves suggests that the solar core is rotating once every week, nearly four times faster than the Sun's surface and intermediate layers, which have rotation periods anywhere from 25 days at the equator to 35 days at the poles. Detecting the signature of the solar core's rotation opens up a new set of questions for solar physicists -- such as how differently-rotating layers of the sun interact, and what we can learn about the composition of the core based on its rotation.

"G-modes have been detected in other stars, and now thanks to SOHO we have finally found convincing proof of them in our own star," Fossat said. "It is really special to see into the core of our own Sun to get a first indirect measurement of its rotation speed. But, even though this decades-long search is over, a new window of solar physics now begins." 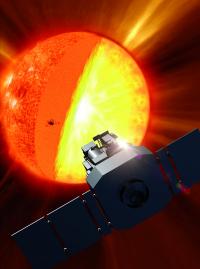