From the ambulance to the intensive care unit, "The acute care setting is a very challenging, chaotic and busy environment," says Robert Silbergleit, M.D., a professor of emergency medicine at Michigan Medicine.

That hasn't stopped Silbergleit and colleague William Barsan, M.D., also a professor of emergency medicine, from building an emergency care clinical trial network collaborating with academic medical centers over the past decade.

They say the approach has benefits.

"When you work within a network, it allows the clinical trials to be done in a way that is more efficient -- but even more importantly the network accumulates and retains expertise, knowledge and experience," Silbergleit says. "There are troops across the country who can hit the ground running and know what they're doing."

Barsan, Silbergleit and Clifton Callaway, M.D., Ph.D., a professor of emergency medicine at the University of Pittsburgh, are taking further advantage of that resource.

The three are principal investigators of a new NIH-funded network: The Strategies to Innovate Emergency Care Clinical Trials Network (SIREN) -- with the University of Michigan serving as the clinical coordinating center. The network is a cooperative award for five years and can be renewed.

SIREN seeks to improve the outcomes of patients with neurologic, cardiac, respiratory, hematologic and trauma emergencies by identifying effective treatments administered in the earliest stages of critical care.

Beyond U-M, the network includes a data coordinating center at the Medical University of South Carolina and 11 award hubs with primary investigators at each.

Although the project is large in size and scope, it is familiar territory for Barsan and Silbergleit.

"We had been the clinical coordinating center for the Neurological Emergencies Treatment Trials Network, funded by the National Institute for Neurologic Disorders and Stroke, for the past 10 years," Barsan says. "There was also another emergency care network, the Resuscitation Outcomes Consortium, funded by the National Heart, Lung and Blood Institute, that was also doing great work."

SIREN came to fruition in 2017 after the two NIH Institutes decided to form a unified emergency care network that would cover a wider spectrum of health conditions.

As a result, the new network will allow researchers to expand clinical trials into more types of illness and injury.

Any trials done within the network still will have to go through the NIH peer review process for funding, and although the process is tedious, Barsan maintains that this produces the best science and the most well-designed clinical trials.

The network already has one clinical trial that has been approved through this process and is ready to begin.

"Our first trial will be evaluating the use of hyperbaric oxygen treatments to promote better outcomes in patients with severe traumatic brain injury," Barsan says. "And we already have other proposals currently in review."

To those involved, one element of the SIREN project stands out: It's an open network.

"Some networks only do studies developed within their network," Barsan says. "But what's great about SIREN is that anybody could be a lead investigator on a trial being done within the network.

"When we accept trials from researchers across the country, we get the best ideas, not just the ideas from within our network. We think this helps us conduct the most impactful clinical trials to improve outcomes for patients with emergency conditions."

He adds, "Even though it's an emergency care network, it's very multidisciplinary. Investigators will come from a variety of specialties, including emergency medicine, neurology, cardiology, neurosurgery, etc."

With so many hubs and the ability for each hub to include additional spokes across the country, studies can be large.

"We could do studies with as few as 10 to 15 sites -- or as many as 100, depending on the type of study and who is interested in participating," Barsan says. "We can use our main 11 hubs and the larger hub and spoke network we have established to achieve exactly the right number of sites needed to conduct each unique clinical trial."

The value of a network

Silbergleit explains that networks such as SIREN ensure emergency care clinical trials are taking place in a health care setting where multiple demands and commotion can make research difficult to conduct.

"In the absence of an emergency network, you saw researchers avoiding clinical trials in the emergency department and often studying interventions many hours or days after patients were admitted to the hospital," Silbergleit says. "The problem is, for many emergencies, interventions are only going to be effective at improving patient outcomes when treatment can be started and studied within the first few minutes or hours. Treating patients later in their hospital course misses this window of opportunity for improvement.

"In the SIREN network, we have the unique opportunity to study interventions in the often chaotic emergency environment that others avoid because we have people who are experts in this phase of care."

A network also allows for continuity.

"Typically, when you do a study on a certain condition, you form a coordinating center, a data center and you look for sites that want to participate," Silbergleit says. "Hopefully it's successful and one creates a team and synergy for the three to five years or so it takes to do the study. But then the study ends and the team disbands. All of the investment in team building and infrastructure is lost.

"The beauty of this network is we will have the opportunity to continue to work with the same people on multiple SIREN trials over the years, and many are folks that we have worked with in the NETT for the past decade. We have accumulated experience working together and will keep building on this with additional new colleagues in SIREN."

Serving as SIREN's clinical coordinating center is an honor for U-M, Barsan says, and he looks forward to the great work the shared network will produce.

"The Department of Emergency Medicine at Michigan Medicine has been a national leader in emergency care clinical trials and one of the leaders for the past 10 years in NIH-funded research in emergency medicine," Barsan says. "This continues that track record." 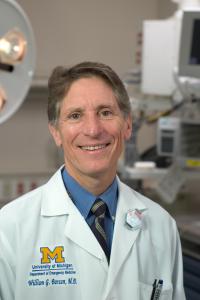