The research teams from the Walter and Eliza Hall Institute worked together to discover the three-dimensional structure of a key cell death protein called Bak and reveal the first steps in how it causes cell death. Their studies were published in Molecular Cell and Proceedings of the National Academy of Sciences.

Programmed cell death, known as apoptosis, occurs naturally when the body has to remove unwanted cells. Chemical signals tell the cell to die by activating the apoptosis proteins Bak and Bax, which break down the 'energy factory' of the cell, known as the mitochondria. When this process goes awry, defective cells such as cancer cells can continue to live, or healthy cells can die unnecessarily, such as occurs in Alzheimer's disease.

"Understanding the way cell death proteins work and what they look like is crucial to finding new ways to treat disease," Dr Czabotar said. "Our research showed how Bak morphs from one shape to another to trigger apoptosis. Once Bak becomes 'activated' within the cell, it couples with another Bak molecule to form a 'dimer', which then goes on to initiate apoptosis."

Dr Czabotar said understanding apoptosis would allow researchers to develop new ways to treat disease. "Knowing the structure of these proteins and how they work in the cell is essential in designing new treatments to fight disease."

Dr Dana Westphal, Dr Ruth Kluck, Dr Grant Dewson, Professor Jerry Adams and colleagues from the Molecular Genetics of Cancer and Cell Signalling and Cell Death divisions examined how the Bak and Bax dimers attach to mitochondria and perforate them. The research was published in Proceedings of the National Academy of Sciences.

"We and others are now working to discover exactly how these proteins come together to destroy the mitochondria and trigger apoptosis. A deeper understanding of this pivotal event is likely to suggest new ways to regulate apoptosis to combat disease."

A matter of life and death: Cell death proteins key to fighting disease 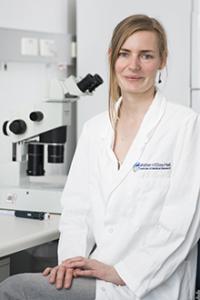