Strigolactones (SLs) are a class of chemical compounds found in plants that have received attention due to their roles as plant hormones and rhizosphere signaling molecules. They play an importantrole in regulating plant architecture, as well as promoting germination of root parasitic weeds (*1) that have great detrimental effects on plant growth and production.

This study was conducted as part of the SATREPS(*2)(Science and Technology Research Partnership for Sustainable Development) program by Dr. Wakabayashi, Prof. Sugimoto and their colleagues at the Graduate School of Agricultural Science, Kobe University, in collaboration with researchers from the University of Tokyo and Tokushima University. They discovered the orobanchol synthase responsible for converting the SL carlactonoic acid, which promotes symbiotic relationships with fungi, into the SL orobanchol, which causes root parasitic weeds to germinate.

By knocking out(*3)the orobanchol synthase gene using genome editing, they succeeded in artificially regulating SL production. This discovery will lead to greater understanding of the functions of each SL and enable the practical application of SLs in the improvement of plant production.

The results of this study were published in the International Scientific Journal Science Advances on December 18, 2019.

>Strigolactones are known to have various functions such as the development of plant architecture, promoting mutually beneficial mycorrhizal relationships with fungi and serving as germination signals for root parasitic weeds.

>This study discovered the synthase gene responsible for converting the non-canonical SL carlactonoic acid into the canonical SL orobanchol.

>The group succeeded in generating tomato plants with the synthase gene knocked out in which carlactonoic acid (CLA) accumulated and orobanchol production was prevented. The germination rate of root parasitic weeds was lower for these knock out plants.

Strigolactones (SL) are a class of chemical compounds that were initially characterized as germination stimulants for root parasitic weeds. SLs have also received attention for their other functions. They play an important role in controlling tiller bud outgrowth and also in promoting mycorrhizal symbiosis in many land plants, whereby plants and fungi mutually exchange nutrients.

Up until now, around 20 SLs have been isolated; with differences in stereochemistry in the C ring and modifications in the A and/or B rings. In recent years, SLs with unclosed BC rings have been discovered. Currently, SLs with a closed ABC ring are designated as canonical SLs, whereas SLs with an unclosed BC ring are non-canonical SLs. However, it is not clear which compounds function as hormones and which compounds function as rhizosphere signals.

If SL production could be suppressed, plants would induce the germination of fewer root parasitic weeds and their adverse effects on crop production would be mitigated. By increasing SL production, on the other hand, plant nutrition would be improved through the promotion of relationships with mycorrhizal fungi. Furthermore, manipulation of the endogenous levels of SL would control plant architecture above ground. Understanding the functions of individual SLs would lead to the development of technology to artificially control plant architecture and the rhizosphere environment. Consequently, there is much interest in how these SLs are biosynthesized.

This research group had isolated orobanchol from cowpea root exudates and determined the structure. From metabolic experiments using cowpea, it was predicted that cytochrome P450(*4)would be involved in the conversion of CLA into orobanchol. In this study, cowpea plants were grown in phosphate rich and poor conditions, where orobanchol production was restricted and promoted, respectively. The genes expressed in the roots of plants in both conditions were comprehensively compared. The group screened for CYP genes whose expression correlated with orobanchol production, expressed them as recombinant proteins, and performed an enzyme reaction assay.

From these results, it was understood that the VuCYP722C enzyme catalyzed the conversion of CLA to orobanchol. Furthermore, the SlCYP722C gene, a homolog (*5) of VuCYP722C in tomato was confirmed to be an orobanchol synthase gene. The SlCYP722C gene was knocked out (KO) in tomato plants using genome editing. In contrast to the wild type (control) tomato plants, orobanchol was not detected in root exudates of the KO plants, with CLA being detected instead.

Thus, the research group proved that SlCYP722C is the orobanchol synthase in tomato that converts the non-canonical SL CLA into the canonical SL orobanchol. The architecture of the KO and wild-type plants was comparable (Photo 1). This demonstrated that orobanchol doesn't control plant architecture in tomato plants. It is thought that these KO tomato plants would still be able to benefit from mycorrhizal fungi, as the activity of CLA against the hyphal branching of the fungi was comparable with that of canonical SLs. Furthermore, it was found that the germination rate of the root parasitic weed Phelipanche aegyptiaca was significantly lower in the hydroponic media of the KO tomato plants (Figure 2). P. aegyptiaca causes great damage to tomato production all over the world, especially around the Mediterranean region. This research showed that it is possible to limit the damage that this parasitic weed does to tomato production by knocking out the orobanchol synthase gene.

This research group succeeded in preventing the synthesis of the major canonical SL orobanchol and accumulating the non-canonical SL carlactonoic acid. The same method can be utilized to elucidate the genes responsible for the biosynthesis of other canonical SLs. Further understanding of the functions of various SLs would allow plants to be manipulated in order to maximize their performance under adverse cultural conditions. Root parasitic weeds detrimentally affect not only tomato but a wide range of other crops including species of Solanaceae, Leguminoceae, Cucurbitaceae and Poaceae. These results will lead to the development of research to alleviate the damage inflicted by root parasitic weeds and increase food production worldwide.

1. Root parasitic weeds
These are weeds that connect with other plants underground and feed off them. Root parasitic weeds can cause great damage to food crops. For example, Orobanche spp. parasitize a wide range of crops including species of Solanaceae, Leguminoceae, Curcurbitaceae and Umbelliferae. The root parasitic weed Striga spp. have a particularly detrimental effect on grain crops, reducing their yield. The establishment of effective countermeasures is an urgent research topic because the damage inflicted by root parasitic weeds to crops is serious across the globe.

2. SATREPS
SATREPS is a Japanese government program that promotes international joint research, co-sponsored by JST (Japan Science and Technology agency) and JICA (Japan International Cooperation Agency). It aims to find solutions for global issues by promoting 3-5 year research collaborations between researchers from Japan and developing countries. JST provides funding for research within Japan and outside the partnership country. If funding is necessary for the partnership country, JICA provides ODA within the framework of technical cooperation projects. The two organizations work together utilizing their respective strengths; JST's expertise in funding domestic research projects and JICA's expertise in technical cooperation in developing countries.

3. Genome editing and gene knock out
Genome editing is a type of genetic engineering which involves making specific modifications to the DNA of a living organism. The DNA is cut at a specific sequence by an engineered nuclease. This cut is repaired through non-homologous end-joining by the cell, resulting in a change to the targeted sequence. This allows small additions or deletions to be made to the DNA and for the function of a specific gene to be removed (knock out).

4. Cytochrome P450
Part of the hemoprotein family. It is called "P450" because the maximum wavelength of the enzymes' absorption is 450 nm when in its reduced state and complexed with carbon monoxide. The existence of cytochrome P450 has been confirmed in a variety of organisms. These hemoproteins are involved in the synthesis of hormones and secondary metabolites, and drug metabolism.

5. Homolog
A gene that resembles another gene due to shared ancestry.

This research was supported by the JST/JICA SATREPS program (JPMJSA1607) 'Improvement of Food Security in Semi-arid Regions of Sudan through Management of Root Parasitic Weeds (Striga)'(Principal Investigator: Professor SUGIMOTO Yukihiro), and the JSPS KAKENHI (19H02897) for the 'Elucidation of strigolactone BC ring formation mechanism aiming at elucidation of the active ingredient as branching inhibitory hormone' (PI: Professor SUGIMOTO Yukihiro) among others.

Solving the riddle of strigolactone biosynthesis in plants 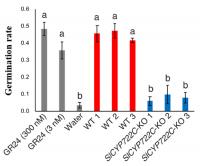