A research group from Kumamoto University, Japan has discovered that cysteinylated albumin (oxidized albumin) in serum can be used as an early diagnostic marker for diabetic kidney disease. Compared with urinary albumin, serum oxidized albumin not only reflects renal pathology at an earlier stage, but can also predict the progression of renal pathology by its degree of elevation. The researchers believe that it can be used as a new diagnostic marker for early diagnosis of diabetic kidney disease.

Diabetic kidney disease is one of three major complications of diabetes. Its prognosis is difficult to improve as it progresses so diagnosing it as early as possible and providing appropriate therapeutic intervention is important. Albumin is the most abundant protein in blood serum and urine, and urinary albumin (albuminuria) is used to diagnose diabetic kidney disease. Albumin maintains osmotic pressure in serum and functions as a carrier of fatty acids and drugs. It is also frequently used as an early marker for diabetic nephropathy because albuminuria increases as kidneys begin failing. However, it is now clear that there are many cases of negative albuminuria in diabetic kidney diseases, especially those derived from type 2 diabetes. Thus, there is a need to develop new early diagnostic markers for these complex and diverse conditions.

"Our study has shown that oxidized albumin may reflect early renal pathology even better than urinary albumin, which is the current gold standard," said Associate Professor Hiroshi Watanabe, who led this study. "In particular, since kidney disease derived from type 2 diabetic patients includes many cases of negative albuminuria, we expect serum oxidized albumin can be used as a new diagnostic marker for diabetic kidney disease."

This research was posted online in Diabetes Care on 26 April 2021. 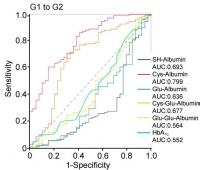