In August 2017, the Bolivian government passed a contentious law that paved the way for construction of a new 190-mile road cutting through one of the country's most iconic and biodiverse protected rainforests. But a report in Current Biology on January 8 shows that the Isiboro-Sécure National Park and Indigenous Territory (or TIPNIS, as the area is commonly known) has been subject to alarming levels of deforestation within its borders for many years, a reality that is too often overlooked.

TIPNIS, which is also the ancestral homeland of four lowland indigenous groups, lost more than 46,000 hectares of forest from 2000 to 2014, according to the report. (To put that in perspective, one hectare is about the size of a standard sports field.) The researchers say they hope the findings will help to give public debate on the matter a stronger foundation based on the best available evidence.

"While many discuss the potential impacts that the planned road could have in the future, very little is spoken about current ecological impacts in the area," says Álvaro Fernández-Llamazares from the University of Helsinki, Finland. "Our analyses show that TIPNIS is already facing rampant levels of deforestation."

It is well established that roads in tropical forests frequently lead to additional habitat conversion. In the case of TIPNIS, the researchers, including Mónica Moraes at Bolivia's Universidad Mayor de San Andrés, report that more than 58 percent of deforestation is found within five kilometers of existing roads. This trend suggests that the planned road will only "magnify the current scale and pace of deforestation in TIPNIS."

"We were surprised to discover that one of Bolivia's most iconic national parks could be facing such alarming levels of deforestation," Moraes says. That TIPNIS has lost more than 46,000 hectares of forest since the year 2000 "is simply unbelievable, considering that the park is not only one of the main biodiversity hotspots in Bolivia, but also one of the most biodiverse regions on Earth."

She notes that the area harbors many plant species that do not live anywhere else. It is also home to emblematic wildlife species, such as the jaguar, marsh deer, and giant otter.

While food security is often noted as justification for road building, the researchers add that most of the deforestation to date in TIPNIS is associated with cultivation of coca, not food crops. With expanded coca cultivation and new incentives for oil and gas exploration throughout Bolivia, they say that downgrading the legal protection of TIPNIS will most likely spur even greater biodiversity losses. The authors therefore call on Bolivia's government to revisit the road plans.

"Bolivian delegations have been very active in climate change negotiations and have vehemently advocated for the codification of the rights of Mother Earth in several international policy frameworks," Fernández-Llamazares says. "The road would most likely open a Pandora's box of environmental problems that, as a signatory of the Convention on Biological Diversity, Bolivia will surely struggle with."

This work has been funded by the Academy of Finland and the Kone Foundation, and NSF-Anthropology. 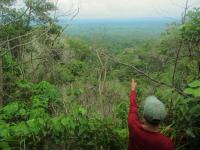