When and how did the first animals appear? Science has long sought an answer. Uppsala University researchers and colleagues in Denmark have now jointly found, in Greenland, embryo-like microfossils up to 570 million years old, revealing that organisms of this type were dispersed throughout the world. The study is published in Communications Biology.

"We believe this discovery of ours improves our scope for understanding the period in Earth's history when animals first appeared - and is likely to prompt many interesting discussions," says Sebastian Willman, the study's first author and a palaeontologist at Uppsala University.

The existence of animals on Earth around 540 million years ago (mya) is well substantiated. This was when the event in evolution known as the "Cambrian Explosion" took place. Fossils from a huge number of creatures from the Cambrian period, many of them shelled, exist. The first animals must have evolved earlier still; but there are divergent views in the research community on whether the extant fossils dating back to the Precambrian Era are genuinely classifiable as animals.

The new finds from the Portfjeld Formation in the north of Greenland may help to enhance understanding of the origin of animals. In rocks that are 570-560 mya, scientists from Uppsala University, the University of Copenhagen and the Geological Survey of Denmark and Greenland have found microfossils of what might be eggs and animal embryos. These are so well preserved that individual cells, and even intracellular structures, can be studied. The organisms concerned lived in the shallow coastal seas around Greenland during the Ediacaran period, 635-541 mya. The immense variability of microfossils has convinced the researchers that the complexity of life in that period must have been greater than has hitherto been known.

Similar finds were uncovered in southern China's Doushantuo Formation, which is nearly 600 million years old, over three decades ago. Since then, researchers have been discussing what kinds of life form the microfossils represented, and some think they are eggs and embryos from primeval animals. The Greenland fossils are somewhat younger than, but largely identical to, those from China.

The new discovery means that the researchers can also say that these organisms were spread throughout the world. When they were alive, most continents were spaced out south of the Equator. Greenland lay where the expanse of the Southern Ocean (surrounding Antarctica) is now, and China was roughly at the same latitude as present-day Florida.

"The vast bedrock, essentially unexplored to date, of the north of Greenland offers opportunities to understand the evolution of the first multicellular organisms, which in turn developed into the first animals that, in their turn, led to us," Sebastian Willman says. 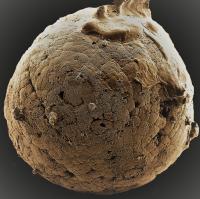