Visible and microwave imagery from NASA's Aqua satellite indicated Tropical Storm Gonzalo was slightly less organized than it was on the previous day.

Gonzalo formed in the central North Atlantic Ocean on July 21 and is moving west.

The Moderate Imaging Spectroradiometer or MODIS instrument that flies aboard NASA's Aqua satellite captured a visible image of Gonzalo late on July 22. The image was created by NASA Worldview at NASA's Goddard Space Flight Center in Greenbelt, Md. The July 22 visible image of Gonzalo showed a central dense overcast that had become a bit ragged. The banding of thunderstorms seen in earlier images had dissipated.

Microwave imagery captured at 12:53 a.m. EDT (0452 UTC) on July 23 from the Atmospheric Infrared Sounder or AIRS instrument also aboard Aqua, indicated a small convective ring (rising air that forms the thunderstorms that make up a tropical cyclone) was present under the overcast. At 11 a.m. EDT, the National Hurricane Center noted, "Recently-obtained microwave data from overnight shows that Gonzalo's center is a little farther south than previously estimated."

On July 23, NHC forecaster Robbie Berg noted, "The storm's structure has become a little disheveled since yesterday, with the deep convection losing some organization."

On July 23, the National Hurricane Center (NHC) issued a Hurricane Watch for Barbados and St. Vincent and the Grenadines.

The National Hurricane Center (NHC) said at 11 a.m. EDT (1500 UTC), the center of Tropical Storm Gonzalo was located near latitude 9.6 degrees north and longitude 48.3 degrees west.  That is about 885 miles (1,425 km) east of the Southern Windward Islands Gonzalo is moving toward the west near 14 mph (22 kph). A westward to west-northwestward motion with an increase in forward speed is expected through the weekend.

Maximum sustained winds are near 65 mph (100 kph) with higher gusts. Gonzalo is a small storm, and tropical-storm-force winds extend outward up to 35 miles (55 km) from the center. The estimated minimum central pressure is 997 millibars.

NHC said, "Some strengthening is forecast during the next couple of days, and Gonzalo could become a hurricane tonight or on Friday. On the forecast track, the center of Gonzalo will approach the southern Windward Islands Friday night and move across the islands Saturday and Saturday evening." 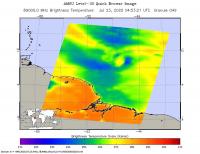