Proteins make life and are made by ribosomes. In mitochondria, the repertoire of the mitoribosomal architectures turns out to be much more diverse than previously thought.

A paper published in eLife by Alexey Amunts lab reports extraction of the mitoribosome from a ciliated protozoan and its reconstruction using cryo-EM. The ciliate mitoribosome substantially differs with regard to its structure that reveals a 4.0-MDa complex of 94 proteins. The high resolution of the reconstruction allowed to identify nine novel proteins encoded in the mitochondrial genome.

Not only that the compositional complexity of the ciliate mitoribosome rivals that of human, it also provides a possible evolutionary intermediate that explains how translation in mitochondria has evolved. A particularly surprising feature is that a single functional protein uS3m is encoded by three complementary genes from the nucleus and mitochondrion, establishing a link between genetic drift and mitochondrial translation.

Among the functional characteristics, the analysis revealed a mitochondria-specific protein mL105 in the exit tunnel that features an intrinsic protein targeting system in mitochondria through a possible recruitment of a synthesized polypeptide.

The exploration of the ciliate mitoribosome structure gauges the full extent of mitochondrial structural and functional complexity and identifies potential evolutionary trends. The results emphasize the power of the cryo-EM based analysis of mitochondria in revealing novel proteins in different eukaryotic lineages.

A ribosome odyssey in mitochondria 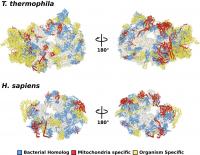