Circling the light trap used to lure insects out of the thick, wet night in Rwanda's mountainous Nyungwe Forest National Park, Riley Tedrow reached to the leaf litter on the ground and nabbed a male and female of what turned out to be a new species of praying mantis.

Tedrow, a third-year student at Case Western Reserve University, was part of a research team led by Cleveland Museum of Natural History's Gavin Svenson, in possibly the first effort to collect mantids in the park. The scientists have found no records of others doing so.

In Nyungwe, they worked with Kabanguka Nathan and Nasasira Richard, from the Kitabi College of Conservation and Environmental Management located near the park.

The researchers call the new animal Dystacta tigrifrutex—bush tiger mantis—named for the female, whose features indicate she hunts prey strictly on the ground and in the undergrowth. The male, on the other hand, flies.

The female provided a couple of bonuses. Soon after she was placed in a screened enclosure, she laid an egg case, called an ootheca, and the researchers were later able to see the emerging first instar nymphs—the insect's first stage.

Their two-weeks of collecting in Rwanda last summer turned up a wealth of finds.

"It took eight months to identify all the species," said Tedrow, an evolutionary biology major.

Tedrow and Svenson were able to compare the new mantis with similar specimens in the Museum für Naturkunde der Humboldt-Universität in Berlin, Germany as well as the U.S. National Museum insect collection, which is on loan to Svenson and is located at the Cleveland museum. None fit with the new specimens.

Using 21 measurements taken from the bush tigers' bodies, coloring and more, Tedrow and Svenson concluded that specimens were from the genus Dystacta, which, until now, had one species: D. alticeps.

Compared to D. alticeps, the overall length of male and female bush tigers are shorter by a third to a half, have fewer spines on parts of their legs and have different coloration patterns on the underside region, called the prosternum, where the front legs attach.

"Dystacta alticeps, the sister species, is spread all over Africa," said Svenson, curator of invertebrate zoology at the museum and an adjunct professor at Case Western Reserve. "The new praying mantis species was found in the high altitude rain forest region of southwestern Rwanda and probably only lives within Nyungwe National Park, which adds significant justification for protecting the park to ensure species like this can continue to exist."

A good look at the male genitalia can help determine one species from another, or how closely related the two are. But hungry ants ate the lower abdomen and accompanying parts while the male specimen was drying in the Rwandan heat.

The biologists didn't know it at the time, but, "unfortunately, they targeted the most important species in the box," Svenson said.

The bush tiger was the only new species to science described from the trip. The researchers also found a dozen new to Rwanda.

The experience has Svenson rethinking the nighttime collecting techniques. Traditionally, entomologists collect the animals that come directly to the bright light traps, but Tedrow found the bush tigers in the fringe of light—what would be the shadows of daytime.

Svenson, Tedrow and fellow researchers will return to Ngyungwe in June to collect more mantises where they found the bush tiger and to search several other locations in the park. They hope to return with a complete male and more new species and learn whether the bush tiger's habitat is limited or more broadly spread. The park includes three distinct habitats: montane, bamboo and lowland forests.

The research is part of Svenson's Project Mantodea and is supported by the Cleveland museum and the National Science Foundation. 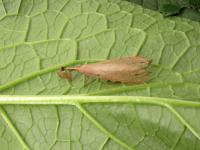