Grain boundaries (GBs) in PSCs have been found to be detrimental to the photovoltaic performance of the devices. Numerous papers reported that the defects in perovskite GBs should be passivated by suitable materials, such as quaternary ammonium halide, fullerene derivatives and CH3NH3I, to alleviate carrier recombination and consequently improve the device performance.

In a new paper published in Light: Science & Applications, a team of scientists, led by Professor Feng Yan from Department of Applied Physics, The Hong Kong Polytechnic University, Hung Hom, Kowloon, Hong Kong, and co-workers have developed a novel method to overcome the drawback of perovskite GBs without defect passivation on them. Several 2-D materials, including black phosphorus (BP), MoS2 and graphene oxide (GO), are specifically modified on the edge of perovskite GBs by a solution process. The 2-D materials have high carrier mobilities, ultrathin thicknesses and smooth surfaces without dangling bonds. The PCEs of the devices are substantially enhanced by the 2-D flakes, in which BP flakes can induce the highest relative enhancement of about 15%. More interestingly, they find that, under certain conditions, GBs modified with the 2-D materials are favorable for the device performance. Therefore, a synergistic effect between the 2-D flakes and perovskite GBs is observed for the first time. Although the nanotechnology of using 2-D materials in PSCs has been reported in some papers, the synergistic effect between the 2-D flakes and perovskite GBs has not been reported until now. To better understand the underlying mechanism of the above effect, device simulation was conducted by using a commercial software. The hole conduction processes from GBs to 2-D flakes in PSCs are clearly demonstrated, showing that the GBs and 2-D flakes all act as hole channels in the devices. The simulation results confirm that the performance enhancement induced by BP is higher than that by other 2-D materials because of the highest hole mobility of BP. In addition, the modification of the 2-D flakes on the perovskite grains away from GBs has little effect on the device performance, indicating that the synergistic effect of 2-D flakes and perovskite GBs is essential to the performance enhancement in our devices.

Although the coverage of the 2-D flakes on the perovskite films is only several percent, most of the flakes are located on perovskite GBs. Due to the high carrier mobilities of the 2-D materials especially BP, hole transfer from GBs is dramatically enhanced in the PSCs, resulting in substantial improvements of the efficiency as well as the stability of the devices. These results also indicate that GBs in PSCs are not detrimental to the device performance if the accumulated holes in the GBs can be conducted out efficiently. Under certain conditions, GBs even can be favorable for the photovoltaic performance of PSCs due to the built-in electric fields around them, which can facilitate photocarrier separation and transfer in the devices. Therefore, perovskite GBs are electrically benign, which is consistent with some theoretical calculations reported before. More importantly, they observed the synergic effect of the 2D flakes on the GBs in PSCs for the first time. Both the carrier mobility and the location of the 2D flakes on the perovskite surface are essential to the performance enhancement. This work provides a guideline of modifying perovskite layers with novel high-mobility 2-D materials to improve the photovoltaic performance as well as the stability of PSCs. 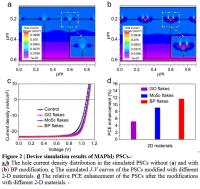