In 1832 Charles Darwin disembarked from HMS Beagle in Bahia Blanca, Argentina where he travelled by land to Buenos Aires. In Bahia Blanca, Darwin collected several fossils of large mammals along with many other living organisms, including several insects. More than 180 years later on Darwin's birthday, February 12, scientists name after him a long lost but new to science beetle genus and species from this collection.

The beetle was discovered and described by Dr. Stylianos Chatzimanolis, an entomologist at the University of Tennessee at Chattanooga, USA as a new genus and species of rove beetles, a group of insects with more than 57,000 described species. The scientific name for the new species is Darwinilus sedarisi. The genus name (Darwinilus) was given in honor of Charles Darwin, while the epithet (sedarisi) was given in honor of Mr David Sedaris, a USA writer. The study was published in the open access journal ZooKeys.

The specimen collected by Darwin was considered lost for many years at the Natural History of Museum, London, until it was rediscovered in 2008. 'I received on loan several insects from the Museum in London, and to my surprise I realized that one of them was collected by Darwin' said Dr. Chatzimanolis. 'Finding a new species is always exciting, finding one collected by Darwin is truly amazing'.

Only two specimens are known for this new species, both collected before 1935. Despite extensive work by Dr. Chatzimanolis in many major European and N. American museums no other specimens have been found. Most of the habitat where the species is found has been transformed into agricultural fields. 'One certainly hopes that a newly described species is not already extinct'.

Read more on rove beetles in the author's blog "Rove beetle musings" at: http://xanthopygina.blogspot.com and follow the author on Twitter @schatzimanolis

Lost and found: New beetle collected by Darwin 180 years ago published on his birthday 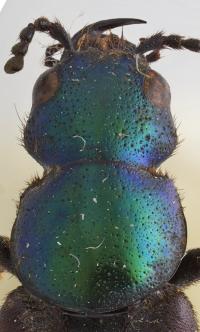