Surplus biomass from the production of flax shives, and generated from Brassica carinata, a yellow-flowered plant related to those which engulf fields in spring, can be used to produce bioethanol. This has been suggested by two studies carried out by Spanish and Dutch researchers and published in the journal Renewable and Sustainable Energy Reviews.

"These studies evaluate, from an environmental point of view, the production of bioethanol from two, as yet unexploited sources of biomass: agricultural residue from flax (for the production of paper fibres for animal bedding), and Brassica carinata crops (herbaceous plant with yellow flowers, similar to those which carpet the countryside in spring)", Sara González-García, researcher of the Bioprocesses and Environmental Engineering Group of the University of Santiago de Compostela (USC), explains to SINC.

González-García, along with other researchers from USC, the Autonomous University of Barcelona and the University of Leiden (Holland), has confirmed that if bioethanol is produced from these two types of biomass "both CO2 emissions and fossil fuel consumption will be reduced, meeting two of the objectives established by the European Union to promote biofuels".

These works have analysed the environmental load associated with the different stages of the process: the harvesting of flax or Brassica; the production of ethanol (through enzymatic hydrolysis followed by fermentation and distillation); mixing it with petrol (in varying proportions); and its use in passenger automobiles.

The results of both studies, published in the journal Renewable and Sustainable Energy Reviews, show that the use of ethanol-based fuels can help to mitigate climate change (by reducing greenhouse gases).

However, these fuels also "contribute to acidification, eutrophication, the formation of photochemical oxidants and toxicity (for people and the environment)". According to the experts, these negative effects could be lessened with the use of high-yield crops, as well as through optimisation of agricultural activity and better use of fertilisers.

Which is better: flax or Brassica?

The studies developed by the researchers reveal that flax (which is richer in cellulose) can produce up to 0.3 kg of ethanol for every kg of dry biomass, compared with 0.25kg/kg of Brassica. However, when the whole production cycle is analysed, the yellow-flowered plant offers a greater production of biomass per hectare and has a lesser environmental impact.

The biofuel produced from these two plants is "second generation bioethanol", which is obtained from forest or agricultural residues, or from herbaceous crops, and does not enter into direct competition with agricultural crops intended for animal or human consumption.

The European Union and the International Monetary Fund are promoting the development of these types of biofuels. Spain is the third largest producer of bioethanol in Europe, after France and Germany, although its use still only represents 0.4% of total energy consumption. 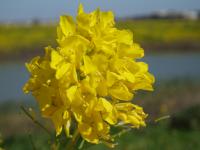