The song of the male nightingale tells females how good a father he will be, according to research published in the open access journal BMC Evolutionary Biology.

The study shows that better singers will feed their offspring more often, and that they advertise this to potential mates by singing in a more orderly way through repeating song sequences, and using more variable song, including many different 'buzz', 'whistle' and 'trill' songs.

In around 80% of all bird species, males play a key role in raising their young. Male nightingales feed the female during incubation, provide food to chicks and defend the nest against predators. A male's parental skills are therefore likely to be a crucial factor for females when choosing a mate.

Female birds assess paternal qualities on the basis of traits, including plumage coloration and courtship behaviour. In nightingales, it is a male's elaborate nocturnal song prior to pair formation that is presumed to be key in advertising their skills as a father. While male birds are able to sing around 180 different song types, little has been understood on the exact song features that are important.

Lead author Conny Bartsch from Freie Universität Berlin, Germany, said: "It has long been thought that a single feature - the size of a bird's song repertoire - may be important for females during mate choice. But our study shows that, in nightingales, it is a mix of specific song features that seem to be more important in determining their paternal efforts.

"These song features have never been described before in any other species, and include the sequential ordering of songs and the use of acoustic structures that are most probably challenging to produce. We were surprised that multiple song features - instead of one 'key' song feature - were related to male feeding effort."

The researchers studied the link between the quality of a male song before pair formation, and how good a parent he then was, based on the rate at which he provided food to his chicks. They studied 20 male nightingales, recording and analysing their nocturnal singing early in the breeding season. Following pair formation, they analysed video footage of their nests and data from electronic tags attached to the birds to record male visits and determine the level of paternal care.

They found that male nightingales contribute substantially to chick feeding, at an equal level to females (around 16 nest visits per hour on average).

Since male nightingales are essentially involved in chick rearing, paternal investment might be a crucial variable for females in choosing a mate. These song features may therefore have evolved to signal direct benefits to females when assessing their mate's potential in future paternal care.

For species with complex song, such as the nightingale, the study suggest that females rely on multiple song cues to quickly gather information about their potential partner and inform mating decisions.

Song orderliness is also known to be associated with male nightingale age. This suggests that ordered singing could serve as an indicator of experience with the breeding grounds, and could mean further benefits for females choosing males with this singing quality.

1. For more video, audio and images of the research, these are available here: http://bit.ly/1JSRHNF Please credit Conny Bartsch in any re-use.

Nightingales show off their fathering skills through song 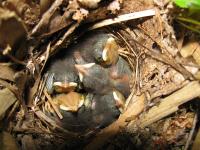