Why were dinosaurs covered in a cloak of feathers long before the early bird species Archaeopteryx first attempted flight? Researchers from the University of Bonn and the University of Göttingen attempt to answer precisely that question in their article "Beyond the Rainbow" in the latest issue of the renowned journal Science. The research team postulates that these ancient lizards had a highly developed ability to discern color. Their hypothesis: The evolution of feathers made dinosaurs more colorful, which in turn had a profoundly positive impact on communication, the selection of mates and on dinosaurs' procreation.

The suggestion that birds and dinosaurs are close relatives dates back to the 19th century, the time when the father of evolutionary theory, Charles Darwin, was hard at work. But it took over 130 years for the first real proof to come to light with numerous discoveries of the remains of feathered dinosaurs, primarily in fossil sites in China. Thanks to these fossil finds, we now know that birds descend from a branch of medium-sized predatory dinosaurs, the so-called theropods. Tyrannosaurus rex and also velociraptors, made famous by the film Jurassic Park, are representative of these two-legged meat eaters. Just like later birds, these predatory dinosaurs had feathers – long before Archaeopteryx lifted itself off the ground. But why was this, particularly when dinosaurs could not fly?

"Up until now, the evolution of feathers was mainly considered to be an adaptation related to flight or to warm-bloodedness, seasoned with a few speculations about display capabilities" says the article's first author, Marie-Claire Koschowitz of the Steinmann Institute for Geology, Mineralogy and Paleontology at the University of Bonn. "I was never really convinced by any of these theories. There has to be some particularly important feature attached to feathers that makes them so unique and caused them to spread so rapidly amongst the ancestors of the birds we know today", explains Koschowitz. She now suggests that this feature is found in dinosaurs' color vision. After analyzing dinosaurs' genetic relationships to reptiles and birds, the researcher determined that dinosaurs not only possessed the three color receptors for red, green and blue that the human eye possesses, but that they, like their closest living relatives, crocodiles and birds, were probably also able to see extremely short-wave and ultraviolet light by means of an additional receptor. "Based on the phylogenetic relationships and the presence of tetrachromacy in recent tetrapods it is most likely that the stem species-of all terrestrial vertebrates had photo receptors to detect blue, green, red and uv", says Dr. Christian Fischer of the University of Göttingen.

This makes the world much more colorful for most animals than it is for human beings and other mammals. Mammals generally have rather poor color vision or even no color vision at all because they tended to be nocturnal during the early stages of their evolution. In contrast, numerous studies on the social behavior and choice of mates among reptiles and birds, which are active during the day, have shown that information transmitted via color exerts an enormous influence on those animals' ability to communicate and procreate successfully.

Feathers allowed for more visible signals than did fur

We know from dinosaur fossil finds that the precursors to feathers resembled hairs similar to mammals' fur. They served primarily to protect the smaller predatory dinosaurs – which would eventually give rise to birds – from losing too much body heat. The problem with these hair-like forerunners of feathers and with fur is that neither allow for much color, but tend instead to come in basic patterns of brown and yellow tones as well as in black and white. Large flat feathers solved this shortcoming by providing for the display of color and heat insulation at the same time. Their broad surface area, created by interlocked strands of keratin, allows for the constant refraction of light, which consequently produces what is referred to as structural coloration. This refraction of light is absolutely necessary to produce colors such as blue and green, the effect of metallic-like shimmering or even colors in the UV spectrum. "Feathers enable a much more noticeable optical signaling than fur would allow. Iridescent birds of paradise and hummingbirds are just two among a wealth of examples," explains Koschowitz.

This work means we must see the evolution of feathers in a whole new light. They provided for a nearly infinite variety of colors and patterns while simultaneously providing heat insulation. Prof. Dr. Martin Sander of the University of Bonn's Steinmann Institute summarizes the implications of this development: "This allowed dinosaurs to not only show off their colorful feathery attire, but to be warm-blooded animals at the same time – something mammals never managed." 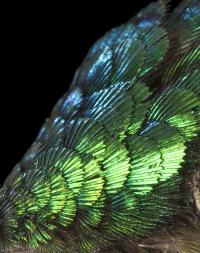 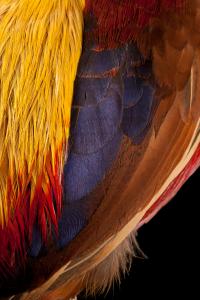