Research from an international team of microbiologists has revealed a new concern about deforestation in the Amazon rainforest – a troubling net loss in the diversity among the microbial organisms responsible for a functioning ecosystem.

The group, which includes professors from The University of Texas at Arlington, University of Oregon, University of Massachusetts, Michigan State University and University of Sao Paulo, sampled a 100 square kilometer area, about 38 square miles, in the Fazenda Nova Vida site in Rondônia, Brazil, a location where rainforest has been converted to agricultural use. Their findings in part validated previous research showing that bacteria in the soil became more diverse over the years, as it was converted to pasture.

But their findings contradicted prior thinking by showing that the loss of restricted ranges for different kinds of bacteria communities resulted in a biotic homogenization and net loss of diversity overall. Scientists worry that the loss of genetic variation in bacteria across a converted forest could reduce ecosystem resilience.

"We have known for a long time that conversion of rainforest land in the Amazon for agriculture results in a loss of biodiversity in plants and animals. Now we know that microbial communities which are so important to the ecosystem also suffer significant losses," said Jorge Rodrigues, the University of Texas at Arlington assistant biology professor who was part of the research team and is first author on a recent publication of the findings.

The new research is described in a paper appearing online the week of Dec. 24-28 in advance of publication in the Proceedings of the National Academy of Sciences. The paper is called "Conversion of the Amazon rainforest to agriculture results in biotic homogenization of soil bacterial communities."

Klaus Nüsslein, project director for the published research and associate professor of microbiology at the University of Massachusetts, said the team found important differences between the pasture and forest soil. For example, the number of bacterial species in the pasture soil was higher, but those species were also less related to one another than species in the forest soil.

"The combination of loss of forest species and the homogenization of pasture communities together signal that this ecosystem is now a lot less capable to deal with additional outside stress," Nüsslein said.

"Our findings are especially important because they support the idea that microbes are impacted by human-caused environmental change," said Bohannan, director of the University of Oregon's Center for Ecology and Evolutionary Biology. This knowledge is important because microbes are responsible for critical environmental processes, such as the recycling of nutrients, the production of clean water and the removal of pollutants, Bohannan said.

Tiedje said the unique study was conducted on a scale that had not been attempted before.

"The systematic and large-scale sampling design of this study gave us the power to see the homogenization," he said.

Scientists on the research team hope their work will provide valuable data to those making decisions about the future of the Amazon rainforest.

"The Amazon represents half of the world's rainforest and is home to one-third of Earth's species, yet the Amazon has one of the highest rates of deforestation," co-authors Pellizari, Tsai and Feigl said in a joint statement. "Agriculture is one of the largest and most dynamic parts of Brazil's economy, so dealing with standing rainforests in the tropics will be tricky, but nevertheless, it is vital that the issue is tackled." Rodrigues said the research team is currently compiling findings about the potential for recovery of the microbial diversity after pastureland is abandoned and returned to "secondary forest."

"Whether bacterial diversity will completely recover from ecosystem conversion will depend in part on whether the taxa lost due to conversion are truly locally extinct or whether they are present in the pasture sites but of such low abundance that they are undetectable in our study," the paper said.

Jorge Rodrigues' work is part of the far-reaching scientific research under way at The University of Texas at Arlington, a comprehensive research institution of more than 33,200 students and more than 2,200 faculty members in the heart of North Texas. Visit www.uta.edu to learn more.

Journal
Proceedings of the National Academy of Sciences
Funder
US Department of Agriculture National Institute for Food and Agriculture, and others 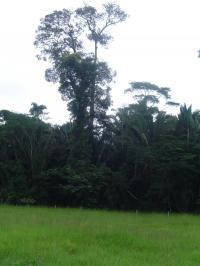