The marine heatwave of 2016 was one of longest and hottest thermal anomalies recorded on the Great Barrier Reef in Australia, influencing multiple species of marine ectotherms, including coral reef fishes.

Dr Celia Schunter from School of Biological Sciences and the Swire Institute of Marine Science (SWIMS), The University of Hong Kong (HKU) and a team of international scientists conducted a study attempting to understand the molecular response of five species to the 2016 heatwave conditions that killed a third of the Great Barrier Reef corals. This is the world-first study tracking how wild fish populations respond to a severe marine heatwave. The results of the study were published in the journal Science Advances.

Marine heatwaves (MHWs) are elevated extreme temperatures in the oceans for an extended period of time, similar to an atmospheric heatwave. These elevated temperatures can have a significant impact on marine life, possibly pushing the thermal limits of many organisms. With the frequency and intensity of heatwaves predicted to increase in the future, this could have greater impacts on the performance of ectotherms, when compared to slight thermal increments over years or decades.

"To understand the challenges fish face under such conditions we used a molecular approach to evaluate how acute warming events directly affect reef fish communities in nature," said Dr Celia Schunter. "We chose to work with five different species which are commonly found on the reef to be able to understand differences in reactions among fish species with different life histories to get a broader overview of the reaction and impact."

"Our study shows that reef fishes are directly affected by heatwaves, but their responses vary greatly among species," said co-author Associate Professor Jodie Rummer from the ARC Centre of Excellence for Coral Reef Studies at James Cook University (Coral CoE at JCU). Dr Rummer was part of the international team that studied changes in the expression of thousands of different genes in five species of coral reef fish, collected at different points before, during and after the 2016 heatwave.

"Changes in gene expression can tell us how an animal responds physiologically to an environmental shock, such as a heatwave," said Dr Celia Schunter from HKU School of Biological Sciences and SWIMS, one of the lead authors in the study. "We measured RNA levels in livers in the fish. This can control when proteins are made and in what amount, and these proteins dictate how the cells of the body function. We saw many genes change expression levels across the timepoints of a heatwave revealing important functions such as cellular stress response and changes in metabolic functions."

Through these genetic analyses, the team identified species-specific physiological responses to the heightened temperatures. "Fast water warming causes an increase of the metabolic demands in fishes, which are similar to what happens to an athlete doing intense exercises. When water temperature increases, fishes have a higher demand for energy and oxygen, which leaves a signal that is measurable with genetic techniques. This higher energy demand at warming can affect their reproduction, swimming and development, and that is why it is important to understand the response to warming." said Dr Moisés A Bernal, co-author of the study from Auburn University.

Interestingly, "these patterns of gene expression also changed with the duration of the heatwave," said Dr Rummer. "This suggests that the physiological mechanisms the fish use to cope with the warmer waters changed as the heatwave progressed. The results suggest fish populations are influenced by both the intensity of a heatwave and how long it lasts." This signals potential long-term consequences for the health of fish populations as extreme heat events increase in frequency, duration and magnitude under human-induced climate change.

At a species level, Dr Rummer says the responses varied in intensity. Some fish struggled less than others. "The spiny damselfish responded strongly to the warmer conditions, with changes in the expression of thousands of genes, suggesting it is particularly sensitive to heatwaves. Other species appear to be more tolerant, with fewer changes in gene expression." said Dr Rummer . Two of the five studies species studied can also be found in waters around Hong Kong and Southern China as well as many more closely related fish species providing also some context for possible effects for waters around Hong Kong.

The study provides a possible approach for predicting which fish species are most at risk under repeated heatwave conditions, said another co-author Professor Timothy Ravasi, from the Marine Climate Change Unit at the Okinawa Institute of Science and Technology Graduate University (OIST). "This has ramifications for policy makers and for the fishing industry, because not all species will be equally affected. We need to screen a large number of species to predict which will be sensitive and which will be more tolerant to warming waters and heatwaves."

"Over time, the fish may adapt to rising temperatures, or even migrate to cooler waters," Professor Ravasi said. "But these heatwaves are happening now, and it's necessary to understand and consider the immediate consequences."

In 2015 the South China Sea experienced a heatwave of a similar magnitude than the heatwave on the Great Barrier Reef studied here. The coastal waters of Hong Kong and the South China Sea are predicted to experience more frequent and intense marine heatwave events as seen on the global scale. It is now clear that these extreme events can have far-reaching effects on marine fishes, but also economic implications on aquaculture and fishing industries Dr Celia Schunter urges the need for more research into the impacts of such events in the marine waters of Hong Kong to avert the potential collapse in the marine ecosystem and the industries relying on it. 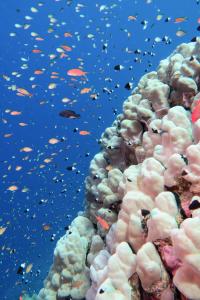