The Transcendental Meditation technique may be an effective and safe non-pharmaceutical aid for treating ADHD, according to a promising new study published December 29, 2008, in the peer-reviewed online journal Current Issues in Education.

The pilot study followed a group of middle school students with ADHD who were meditating twice a day in school. After three months, researchers found over 50 percent reduction in stress and anxiety and improvements in ADHD symptoms.

"The effect was much greater than we expected," said Sarina J. Grosswald, Ed.D., a George Washington University-trained cognitive learning specialist and lead researcher on the study. "The children also showed improvements in attention, working memory, organization, and behavior regulation."

Grosswald said that after the in-school meditation routine began, "teachers reported they were able to teach more, and students were able to learn more because they were less stressed and anxious."

Stress interferes with the ability to learn

Prior research shows ADHD children have slower brain development and a reduced ability to cope with stress. "Stress interferes with the ability to learn—it shuts down the brain," said William Stixrud, Ph.D., a Silver Spring, Maryland, clinical neuropsychologist and co-author of the study.

"Medication for ADHD is very effective for some children, but it is marginally or not effective for others. Even for those children who show improved symptoms with the medication, the improvement is often insufficient or accompanied by troubling side effects," Stixrud said. "Virtually everyone finds it difficult to pay attention, organize themselves and get things done when they're under stress. So it stands to reason that the TM technique which reduces stress and organizes brain function would reduce ADHD symptoms."

While in some cases a child cannot function without medication, there is growing concern about the health risks and side effects associated with the common ADHD medications, including mood swings, insomnia, tics, slowed growth, and heart problems. In 2006 the FDA required manufacturers to place warning labels on ADHD medications, listing the potential serious health risks.

These high risks and growing concerns are fueling parents' search for alternatives that may be safer for their kids.

The study was conducted in a private K-12 school for children with language-based learning disabilities. Participation was restricted to 10 students, ages 11-14, who had pre-existing diagnoses of ADHD. About half of the students were on medication. The students meditated at school in a group for 10 minutes, morning and afternoon.

To determine the influence of the TM technique, at the beginning and end of the three-month period, parents, teachers and students completed standard ADHD assessment inventories measuring stress and anxiety, behavior and social competency, and executive function. Students were also given a battery of performance tests to measure cognitive functioning.

"The results were quite remarkable"

Andy and Daryl Schoenbach's daughter was diagnosed with ADHD in second grade. Like most ADHD children she was taking medication. "The medication helped but had mixed results—she still lost focus, had meltdowns, and the medications affected her sleep and appetite," said Andy, who lives with Daryl in Washington D.C. "She was not performing close to her potential and we didn't see the situation improving. So at the end of seventh grade when her doctor recommended increasing the medication, we decided it was time to take a different course—stopping the medication and using Transcendental Meditation."

"The results were quite remarkable," Daryl said. "The twice daily meditations smoothed things out, gave her perspective, and enabled her to be in greater control of her own life when things started falling apart. It took some time, but it gradually changed the way she handled crises and enabled her to feel confident that she could take on greater challenges —in her own words, 'climb a mountain.'"

"Everyone noticed the change," Andy added.

Grosswald explained that there is substantial research showing the effectiveness of the TM technique for reducing stress and anxiety, and improving cognitive functioning among the general population. "What's significant about these new findings is that among children who have difficulty with focus and attention, we see the same results. TM doesn't require concentration, controlling the mind or disciplined focus. The fact that these children are able to do TM, and do it easily shows us that this technique may be particularly well suited for children with ADHD," she said.

This study was funded by the Abramson Family Foundation and the Institute for Community Enrichment.

A second, recently completed TM-ADHD study with a control group measured brain function using electroencephalography (EEG). Preliminary data shows that three months practice of the technique resulted in significant positive changes in brain functioning during visual-motor skills. Changes were specifically seen in the circuitry of the brain associated with attention and distractibility. After six months TM practice, measurements of distractibility moved into the normal range.

A third TM-ADHD study, to be funded by a $2 million grant from the David Lynch Foundation (DavidLynchFoundation.org), will more fully investigate the effects of the technique on ADHD and other learning disorders. 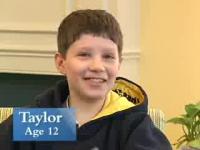 Students with ADHD Before and After Learning TM