Researchers are developing early detection technology for Type 1 diabetes that can accurately predict if a child is at risk of the chronic disease.

There is currently no early test for Type 1 diabetes and by the time someone is diagnosed, about 70 per cent of their critical insulin-producing cells have been destroyed.

The Australian researchers from RMIT University and University of Sydney hope their detection kit could one day be used as a standard test for newborns, catching the disease in its earliest stages and enabling the development of treatments to delay or even prevent its onset.

"The detection kit we're developing is cost-effective and simple to use, requiring no specialist technical knowledge or expensive analysis," Bansal said.

"Being able to detect this disease well before it has a chance to progress would be life-changing for the 2400 Australians diagnosed with Type 1 diabetes each year."

Type 1 diabetes is a lifelong autoimmune disorder that affects about 542,000 children around the world, with increasing numbers of adults also being diagnosed.

The technology being developed by RMIT scientists and engineers uses a microchip and sensor to detect markers in the blood that can identify the early loss of beta cells.

Beta cells are found in the pancreas and are the body's only way of making insulin, the sugar-regulating hormone that people with Type 1 diabetes cannot produce.

Researchers at the University of Sydney, led by Associate Professor Anand Hardikar, have previously discovered about 20 biomarkers in the blood that can accurately predict the health of beta cells.

The collaboration with RMIT builds on that breakthrough, with the aim of developing a point-of-care device to test for these biomarkers and produce results within minutes.

Led by Bansal and cell biologist Dr Ravi Shukla, scientists at RMIT's Ian Potter NanoBiosensing Facility have already developed a proof-of-concept sensor coated with special nanoparticles. The sensor can reliably detect the presence of select biomarkers, changing colour if a particular molecule is present in the blood.

The next stage is working with the engineers at RMIT's Micro Nano Research Facility to expand the sensor's capabilities and miniaturise it onto a microfluidic chip about the size of a postage stamp.

A microfluidic chip contains tiny channels and pumps that can precisely control fluid. While blood is notoriously difficult to handle in microfluidic systems, RMIT researchers have pioneered technology that avoids the need for special processing.

"The prototype we're building will be able to analyse just a pin-prick of blood from a patient and provide a score that indicates the risk of Type 1 diabetes," Mitchell said.

"The ultimate aim is to be able to slow or prevent the onset of Type 1 Diabetes. The test could also significantly boost the development of therapies to prevent or delay the disease.

"We know the separate components of the device work, so now the challenge is to bring the sensor and the chip together into one easy-to-use device."

The research is supported through over $AU1.2 million in funding from The Leona M and Harry B Helmsley Charitable Trust, one of the largest medical research-funding philanthropic trusts in the world.

The funding grant is administered by JDRF Australia, the nation's the peak body supporting research into Type 1 Diabetes. 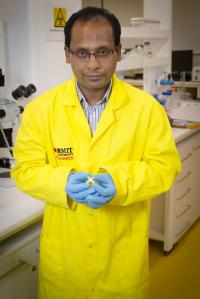