Anti-cancer strategies generally involve killing off tumor cells. However, cancer cells may instead be coaxed to turn back into normal tissue simply by reactivating a single gene, according to a study published June 18th in the journal Cell. Researchers found that restoring normal levels of a human colorectal cancer gene in mice stopped tumor growth and re-established normal intestinal function within only 4 days. Remarkably, tumors were eliminated within 2 weeks, and signs of cancer were prevented months later. The findings provide proof of principle that restoring the function of a single tumor suppressor gene can cause tumor regression and suggest future avenues for developing effective cancer treatments.

Colorectal cancer is the second leading cause of cancer-related death in developed countries, accounting for nearly 700,000 deaths worldwide each year. "Treatment regimes for advanced colorectal cancer involve combination chemotherapies that are toxic and largely ineffective, yet have remained the backbone of therapy over the last decade," says senior study author Scott Lowe of the Memorial Sloan Kettering Cancer Center.

Up to 90% of colorectal tumors contain inactivating mutations in a tumor suppressor gene called adenomatous polyposis coli (Apc). Although these mutations are thought to initiate colorectal cancer, it has not been clear whether Apc inactivation also plays a role in tumor growth and survival once cancer has already developed.

"We wanted to know whether correcting the disruption of Apc in established cancers would be enough to stop tumor growth and induce regression," says first author Lukas Dow of Weill Cornell Medical College. This question has been challenging to address experimentally because attempts to restore function to lost or mutated genes in cancer cells often trigger excess gene activity, causing other problems in normal cells.

To overcome this challenge, Lowe and his team used a genetic technique to precisely and reversibly disrupt Apc activity in a novel mouse model of colorectal cancer. While the vast majority of existing animal models of colorectal cancer develop tumors primarily in the small intestine, the new animal model also developed tumors in the colon, similar to patients. Consistent with previous findings, Apc suppression in the animals activated the Wnt signaling pathway, which is known to control cell proliferation, migration, and survival.

When Apc was reactivated, Wnt signaling returned to normal levels, tumor cells stopped proliferating, and intestinal cells recovered normal function. Tumors regressed and disappeared or reintegrated into normal tissue within 2 weeks, and there were no signs of cancer relapse over a 6-month follow-up period. Moreover, this approach was effective in treating mice with malignant colorectal cancer tumors containing Kras and p53 mutations, which are found in about half of colorectal tumors in humans.

Although Apc reactivation is unlikely to be relevant to other types of cancer, the general experimental approach could have broad implications. "The concept of identifying tumor-specific driving mutations is a major focus of many laboratories around the world," Dow says. "If we can define which types of mutations and changes are the critical events driving tumor growth, we will be better equipped to identify the most appropriate treatments for individual cancers."

For their own part, Lowe and his team will next examine the consequences of Apc reactivation in tumors that progress beyond local invasion to produce distant metastases. They will also continue to investigate why Apc is so effective at suppressing colon tumor growth, with the goal of one day mimicking this effect with drug treatments.

"It is currently impractical to directly restore Apc function in patients with colorectal cancer, and past evidence suggests that completely blocking Wnt signaling would likely be severely toxic to normal intestinal cells," Lowe says. "However, our findings suggest that small molecules aimed at modulating, but not blocking, the Wnt pathway might achieve similar effects to Apc reactivation. Further work will be critical to determine whether WNT inhibition or similar approaches would provide long-term therapeutic value in the clinic." 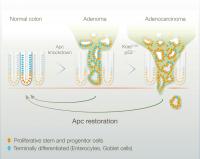