The distinctive troughs and crests of the human brain are not present in most animals; highly folded brains are seen only in a handful of species, including some primates, dolphins, elephants and pigs. In humans, folding begins in fetal brains around the 20th week of gestation and is completed only when the child is about a year and a half.

Why the brain is folded can be rationalized easily from an evolutionary perspective; folded brains likely evolved to fit a large cortex into a small volume with the benefit of reducing neuronal wiring length and improving cognitive function.

Less understood is how the brain folds. Several hypotheses have been proposed but none have been directly used to make testable predictions. Now, researchers at the Harvard John A. Paulson School of Engineering and Applied Sciences collaborating with scientists in Finland and France have shown that while many molecular processes are important in determining cellular events, what ultimately causes the brain to fold is a simple mechanical instability associated with buckling.

The research is published in Nature Physics.

Understanding how the brain folds could help unlock the inner workings of the brain and unravel brain-related disorders, as function often follows form.

"We found that we could mimic cortical folding using a very simple physical principle and get results qualitatively similar to what we see in real fetal brains," said L. Mahadevan, the Lola England de Valpine Professor of Applied Mathematics, Organismic and Evolutionary Biology, and Physics.

The number, size, shape and position of neuronal cells during brain growth all lead to the expansion of the gray matter, known as the cortex, relative to the underlying white matter. This puts the cortex under compression, leading to a mechanical instability that causes it to crease locally.

"This simple evolutionary innovation, with iterations and variations, allows for a large cortex to be packed into a small volume, and is likely the dominant cause behind brain folding, known as gyrification," said Mahadevan, who is also a core faculty member of the Wyss Institute for Biologically Inspired Engineering, and member of the Kavli Institute for Bionano Science and Technology, at Harvard University.

Mahadevan's previous research found that the growth differential between the brain's outer cortex and the soft tissue underneath explains the variations in the folding patterns across organisms in terms of just two parameters, the relative size of the brain, and the relative expansion of the cortex.

Building on this, the team collaborated with neuroanatomists and radiologists in France and directly tested this theory using data from human fetuses. The team made a three-dimensional, gel model of a smooth fetal brain based on MRI images. The model's surface was coated with a thin layer of elastomer gel, as an analog of the cortex. To mimic cortical expansion, the gel brain was immersed in a solvent that is absorbed by the outer layer causing it to swell relative to the deeper regions. Within minutes of being immersed in liquid solvent, the resulting compression led to the formation of folds similar in size and shape to real brains.

The extent of the similarities surprised even the researchers. "When I put the model into the solvent, I knew there should be folding but I never expected that kind of close pattern compared to human brain," said Jun Young Chung, post doctoral fellow and co-first author of the paper. "It looks like a real brain."

The key to those similarities lies in the unique shape of the human brain.

"The geometry of the brain is really important because it serves to orient the folds in certain directions," said Chung. "Our model, which has the same large scale geometry and curvature as a human brain, leads to the formation of folds that matches those seen in real fetal brains quite well."

The largest folds seen in the model gel brain are similar in shape, size and orientation to what is seen in the fetal brain, and can be replicated in multiple gel experiments. The smallest folds are not conserved, mirroring similar variations across human brains.

"Brains are not exactly the same from one human to another, but we should all have the same major folds in order to be healthy," said Chung. "Our research shows that if a part of the brain does not grow properly, or if the global geometry is disrupted, we may not have the major folds in the right place, which may cause dysfunction in the brain. "

This research was co-authored by co-first author Dr. Tuomas Tallinen of Jyvaskyla University in Finland, Francois Rousseau from the Institut Mines-Telecom in France, Nadine Girard and Julien Lefevre of the University of Aix-Marseille, France. It was supported by Academy of Finland, the Wyss Institute for Biologically Inspired Engineering, and fellowships from the MacArthur Foundation and the Radcliffe Institute. 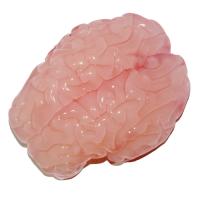