A public-private consortium led by the biotech Iproteos -based at Parc Científic de Barcelona (PCB)-, and comprised by the biopharmaceutical company Ascil-Biopharma, the Institute for Biomedical Research (IRB Barcelona), the Centre for Genomic Regulation (CRG) and the University of the Basque Country (UPV/EHU) has launched a project to advance the development of a new neuroprotective drug for the treatment of the cognitive impairment associated with schizophrenia and other mental disorders. The project, called "Spark", has just received a 500,000 euro grant from the Ministry of Economy and Finance, through the 2014 "Retos-Colaboración" (Challenges-Collaboration) subprogram call as part of the National Programme for Research Aimed at the Challenges of Society' (File. RTC-2014-1645-1).

The drug candidate is IPR019, that belongs to a family of compounds of so-called 'third generation', has been developed and patented by Iproteos. The therapeutic activity of the drug is based on blocking a protein located in the brain that is related to the cognitive impairment. "Our drug acts through a yet unexplored novel mechanism of action in the treatment of schizophrenia, and it is therefore, a first-in-class drug", explains scientist Teresa Tarragó, CEO of Iproteos and researcher at IRB Barcelona.

IPR019 is a peptide derivative (small protein) able to cross the blood-brain barrier- a protective wall of the brain, impassable for most of the drugs available in the market- which has already shown its efficacy as a cognitive enhancer in in vivo tests. Scientists have achieved a significant improvement in learning and memory capabilities, which make it a revolutionary treatment for diseases of the central nervous system in which cognitive abilities are severely diminished.

Iproteos, the biotech coordinating the project, will assess the metabolism and toxicity of candidate compounds and their activity once administered orally and subcutaneously in animal models. The Peptides and Proteins Lab at IRB Barcelona -led by Ernest Giralt where Teresa Tarragó works as associate researcher- will be in charge of the compound synthesis. The Proteomics Unit of the CRG-UPF -led by Eduard Sabidó- will carry out proteomic studies to assess the changes caused in the cells after they are treated with the compounds. ASCIL Biopharm -led by Roland Chérif-Cheikh- will be in charge of the research and development of the oral and infectable pharmaceutical forms.. Finally, the Neuropsychopharmacology Unit of the UPV/EHU -led by Javier Meana- will be responsible for ratifyingthe activity of the formulations by means of in vivo studies in animal models of schizophrenia.

The expected end-result will be the obtaining of an optimal formulation and a route of administration of the compound for its use as a drug in patients. This will allow carrying out the regulatory preclinical trials and then the first-in-human trials in 2016 with a future application in health centers.

Schizophrenia is the third most disabling disease- even above paraplegia and blindness- in the DALYS index (Disability-Adjusted Life Years) of the World Health Organization (WHO). It is estimated to affect about 24 million people worldwide, and it is the fifth most costly disease for society in terms of required care and loss of productivity (up to 90% of patients are not working) with an annual cost in the European Union exceeding 35 billion euros.

"The treatment, developed by Iproteos, represents a major advance in the management of this disease. Currently, there are no drugs able to correct the cognitive deficits in patients with schizophrenia, therefore an effective therapy will have a major impact on the life quality of patients. Given its efficacy and innovative nature, there are already multinational pharmaceutical companies interested in following the project progress ", Teresa Tarragó says.

Iproteos, located at the Parc Cientific de Barcelona, is a spin-off created in 2011 by two Catalan leading scientists in the field of therapeutic peptides, Teresa Tarragó and Ernest Giralt, based on the transfer of technology developed at IRB Barcelona and the University of Barcelona. The company focuses its activity on the discovery of new therapeutic strategies based on the modulation of protein-protein or protein-ligand interactions by peptide derivatives. In particular, its project portfolio focuses on finding drugs for diseases of the central nervous system. For further information: http://www.iproteos.com.

Ascil Biopharm, located within the Barcelona Tech Science Park of the Polytechnical University of Catalonia (UPC), is a Drug delivery systems (DDS) R&D+I company created in 2012 by a team coming from the pharma industry, with wide experience in innovation and development of novel controlled release dosage forms and biomedical devices. Their mission is to create pharmaceutical products and therapeutic treatments of Improved efficacy, comfort and compliance thanks to new patented DDS technology platforms and their unique expertise. Their differential know-how lies in addition, in offering new Product-Device combinations adapted to unmet medical needs. For further information http://www.ascil-biopharm.com

Created in 2005 by the Generalitat de Catalunya, IRB Barcelona is a Severo Ochoa Centre of Excellence since 2011. The 23 laboratories and six technology platforms are devoted to basic and applied science with the goal of addressing biomedical problems with socio-economic impact. It is an international center that houses more than 400 workers of 36 nationalities. Its final mission is to transfer the results to clinical practice and has already established three biotech companies, including Iproteos. This year IRB Barcelona celebrates its tenth anniversary. For further information: http://www.irbbarcelona.org /@IRBBarcelona / http://www.facebook.com/irbbarcelona

About the Centre for Genomic Regulation (CRG)

CRG is an international biomedical research institute of excellence, the mission of which is to discover and advance knowledge for the benefit of society, public health and economic prosperity. The CRG believes that the medicine of the future depends on the current innovative science. This requires an interdisciplinary research team focused on understanding the complexity of life, from the genome to the cell, up to a complete organism and its interaction with the environment, which provides a comprehensive view of genetic diseases. The combination of the 'know how' of leading scientists from around the world and the availability of leading-edge equipment, makes the CRG a unique scientific-technical center with a high-level scientific output in the international context and the best scientific-technical service platoforms for research. For further information: http://www.crg.eu

About the Neuropsychopharmacology Group of the UPV/EHU

The Neuropsychopharmacology Research Group at the UPV / EHU is an international leader in the study of the biological substrates of mental illnesses and the development of new and more effective treatments for these diseases. At present, the group focuses its activity on the study of factors that can trigger psychotic episodes and the mechanisms that generate cognitive impairment and deterioration in schizophrenia. The group usually works on postmortem brain samples from subjects with mental illnesses and in mental illness animal models. The Neuropsychopharmacology Research Group at the UPV / EHU is part of the CIBER consortium of Mental Health, which is linked to the Instituto de Salud Carlos III. For further information: http://www.ehu.es/neuropsicofarmacologia

Funder
Ministry of Economy and Finance 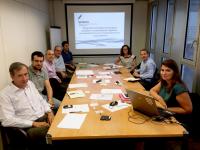 Members of the Spark Project