A new owl is the first endemic bird species discovered on the island of Lombok, Indonesia, according to research published February 13 in the open access journal PLOS ONE by an international team headed by George Sangster of the Swedish Museum of Natural History and colleagues from other institutions.

The new species has long been confused with a more widespread Indonesian owl species because of its similar plumage. However, in September 2003, two members of the team independently discovered that the vocalizations of the owls on Lombok were unique and different from all other Indonesian owls.

George Sangster comments, "It was quite a coincidence that two of us identified this new bird species on different parts of the same island, within a few days of being on the island. That is quite a coincidence, especially considering that no-one had noticed anything special about these owls in the previous 100 years."

Because owls are mostly nocturnal, they use songs to communicate and recognize their own species. Thus, when owls have consistently different vocalizations this is generally taken to mean that they are different species. The new owl's song is a whistled note completely unlike that of other owls. Locals on the island recognize the bird and refer to it as "burung pok", an onomatopoeic name reflecting the song note of the bird, which sounds like "pok" or "poook", say the authors.

Based on their field work, comparisons to museum specimens and previous studies, the researchers suggest that the new owl species is unique to this one island. When surveyed, locals on the neighboring island of Sumbawa were unfamiliar with the bird. The researchers say, "With one exception, none of the locals recognized the songs from playback of recordings made on Lombok except for one man, but he was an immigrant from Lombok who knew the song only from Lombok and had never heard it on Sumbawa."

The new species of owl is named Otus jolandae, after the wife of one of the researchers who co-discovered the species in 2003. The authors suggest using the common name Rinjani Scops Owl, after Gunung Rinjani, a volcano on Lombok that is the second highest volcano in Indonesia.

Financial Disclosure: This study was funded by the authors.

PLEASE LINK TO THE SCIENTIFIC ARTICLE IN ONLINE VERSIONS OF YOUR REPORT (URL goes live after the embargo ends):

New owl species discovered in Indonesia is unique to one island 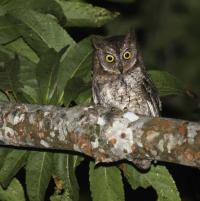