CHAMPAIGN, Ill. — Researchers at the University of Illinois report that a toxic molecule known to damage cells and cause disease may also play a pivotal role in bird migration. The molecule, superoxide, is proposed as a key player in the mysterious process that allows birds to "see" Earth's magnetic field.

The discovery, reported this month in Biophysical Journal, occurred as a result of a "mistake" made by a collaborator, said principal investigator Klaus Schulten, who holds the Swanlund Chair in Physics at Illinois. His postdoctoral collaborator, Ilia Solov'yov, of the Frankfurt Institute for Advanced Studies, did not know that superoxide was toxic, seeing it instead as an ideal reaction partner in a biochemical process involving the protein cryptochrome in a bird's eye.

Cryptochrome is a blue-light photoreceptor found in plants and in the eyes of birds and other animals. Schulten was the first to propose (in 2000) that this protein was a key component of birds' geomagnetic sense, a proposal that was later corroborated by experimental evidence. He made this prediction after he and his colleagues discovered that magnetic fields can influence chemical reactions if the reactions occur quickly enough to be governed by pure quantum mechanics.

"Prior to our work, it was thought that this was impossible because magnetic fields interact so weakly with molecules," he said.

Such chemical reactions involve electron transfers, Schulten said, "which result in freely tumbling spins of electrons. These spins behave like an axial compass."

Changes in the electromagnetic field, such as those experienced by a bird changing direction in flight, appear to alter this biochemical compass in the eye, allowing the bird to see how its direction corresponds to north or south.

"Other researchers had found that cryptochrome, acting through its own molecular spins, recruits a reaction partner that operates at so-called zero spin. They suggested that molecular oxygen is that partner," Schulten said. "We propose that the reaction partner is not the benign oxygen molecule that we all breathe, but its close cousin, superoxide, a negatively charged oxygen molecule."

When Solov'yov showed that superoxide would work well as a reaction partner, Schulten was at first dismissive.

"But then I realized that the toxicity of superoxide was actually crucial to its role," he said. The body has many mechanisms for reducing concentrations of superoxide to prevent its damaging effects, Schulten said. But this gives an advantage, since the molecule must be present at low concentrations – but not too low – "to make the biochemical compass work effectively," he said.

Although known primarily as an agent of aging and cellular damage, superoxide recently has been recognized for its role in cellular signaling.

However, its toxicity may also explain why humans, who also have cryptochrome in their eyes, do not have the same ability to see Earth's electromagnetic field, Schulten said.

"Our bodies try to play it safe," he said. "It might be that human evolution chose longevity over orientational ability."

Schulten directs the theoretical and computational biophysics group at the Beckman Institute for Advanced Science and Technology at Illinois. 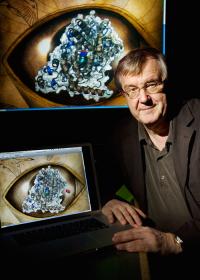