COLUMBUS, Ohio – A new study provides a first glimpse of exactly what people find offensive about super-sized houses which have sprouted up in neighborhoods around the country.

Researchers found that people particularly dislike when these large homes, often derisively called "McMansions," are more than two times as tall as surrounding homes, and when their architectural style is not compatible with the neighboring homes.

The results can provide guidelines for communities that are struggling to regulate the construction of these super-sized houses in existing neighborhoods, said Jack Nasar, co-author of the study and professor of city and regional planning at Ohio State University.

"We found some general rules that could help people build a new home that gives them more space, but still respects the views of other people," Nasar said.

While some new neighborhoods have been built with all super-sized homes, this study examines "infill" McMansions, or a super-sized house built to replace or add on to an existing home in an established neighborhood.

Previous research by Nasar and his colleagues found that about two-thirds of America's largest cities have reported the appearance of McMansions and about 39 percent of these cities had adopted new regulations concerning their construction.

But the question has been what exactly to regulate, Nasar said. That's because there is no accepted definition of what constitutes a McMansion, or what exactly people find offensive about them.

So Nasar and co-author Arthur Stamps of the Institute of Environmental Quality in San Francisco decided to study the issue. Their results will be published in the March 2009 issue of the Journal of Environmental Psychology, and now appear online.

In a series of six experiments, the researchers asked a total of 226 college students and other randomly selected residents of central Ohio to respond to computer-generated images of various streetscapes. Some of the images showed McMansions of various sizes and styles mixed in with other buildings on a neighborhood block.

Depending on the study, respondents were asked to rate how much they liked or disliked how the block looked, how visually appealing it was, and how compatible the buildings in the image were.

Results showed that the architectural style of a McMansion had the strongest effect on whether people rated it as compatible and visually appealing.

"The McMansion house didn't have to be the exact same style as others in the neighborhood, but it did have to fit in for it to be rated highly," Nasar said.

Participants in the study didn't have any problem with large houses in general, but they disliked it when one house was significantly larger than the others on the block. In other words, viewers paid attention to size ratio and not absolute size.

Nasar said he was surprised that people didn't start rating blocks significantly lower until the McMansion was at least twice as big as the surrounding homes.

"That's a pretty big difference in size," Nasar said. "Keeping your new house no more than twice the size of your neighbors doesn't seem to be too much of a constraint."

For participants in the study, size mostly related to height. While relative height mattered, people did not react as negatively to homes that were significantly wider than those of the neighboring homes.

As might be expected, participants had more negative evaluations of McMansions when their viewing distance was closer.

"Next-door neighbors and those who live across the street are probably the ones who have the most negative reaction when a McMansion goes up in the neighborhood," Nasar said.

Nasar said one important limitation of the study is that people were looking at pictures of houses, with no landscaping or other context. People may react differently when they see actual houses.

But this study aimed to give a preliminary idea of how cities may regulate the building of super-sized houses in their communities.

"We found that communities should try to maintain stylistic consistency and limit the size of new homes to less than roughly twice the size of the neighboring houses," Nasar said. "Those are the factors that seem to concern people most."

Height, style of 'McMansions' are what turn off neighbors 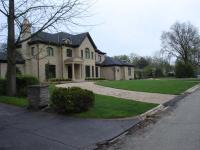