Juvenile salmon migrating to the sea in the Sacramento River face a gauntlet of hazards in an environment drastically modified by humans, especially with respect to historical patterns of stream flow. Many studies have shown that survival rates of juvenile salmon improve as the amount of water flowing downstream increases, but "more is better" is not a useful guideline for agencies managing competing demands for the available water.

Now fisheries scientists have identified key thresholds in the relationship between stream flow and salmon survival that can serve as actionable targets for managing water resources in the Sacramento River. The new analysis, published May 19 in Ecosphere, revealed nonlinear effects in the flow-survival relationship, meaning it changes in stepwise fashion, with significant jumps in survival rates at two key steps.

A threshold defined in the paper as the "historic mean" flow of 10,712 cubic feet per second (cfs) provides an especially important target for resource managers, said first author Cyril Michel, a project scientist in the Institute of Marine Sciences at UC Santa Cruz.

"We see a substantial increase in salmon survival above that level, so if we can increase stream flow to that level for critical periods of the year, it would really benefit the salmon populations," Michel said.

The researchers analyzed migration survival data from 2,436 juvenile Chinook salmon tagged with acoustic transmitters and tracked in years with different water flows, from 2013 to 2019. After identifying the key thresholds, the team then used historical data on river flows and salmon migration patterns to run simulations of different management actions.

"We wanted to see how much the salmon populations would benefit if we had enacted flows to match that threshold of 10,712 cfs," Michel said. "We found we could increase survival by a lot, sometimes doubling or tripling the survival rates in a given year, without having to spend too much water. It's a reasonable target that won't break the bank in most years."

Juvenile salmon migrate out to sea in the spring, which was historically a period of high flows in the Sacramento River. Now, however, dams and water diversions combined with seasonal reductions in flows from tributaries result in spring flows that tend to be the lowest of the year.

"Because of how we've plumbed the Central Valley, salmon now have to migrate out during low flows. So we're proposing to enact pulse flows in the spring to bring the river up to historical conditions for short periods of time," Michel said.

He noted that plans to implement pulse flows in the Sacramento River are now being developed under environmental permits renegotiated last year for the Central Valley Project, the massive federal water management project that includes the Sacramento River. An interagency group of scientists has agreed to use the 10,712 cfs threshold as the target for these pulse flows, Michel said.

"We're excited that this might actually happen this year or next, and we will be tracking survival rates to see how successful it is," he said. "This could be a tool that is used for many years to come, with real benefits for salmon populations."

Additional research on the optimal timing of pulse flows could improve their implementation, enabling adaptive management in response to environmental conditions, he added.

The study identified two other thresholds, defined as "minimum" (4,259 cfs) and "high" (22,872 cfs). Below the minimum threshold, only 3% of the tagged salmon survived the migration. Survival was 18.9% between minimum and historic mean, 50.8% between historic mean and high, and 35.3% above the high threshold.

The results suggest that the main mechanism behind the flow thresholds relates to how fast migrating fish are able to move through the river and get past the hazards along the way. Travel times for fish during flows between the historic mean and high thresholds were significantly shorter than for fish experiencing all other flows.

"In most years, it's best for juvenile salmon to rear in the upper river where it's safer, and then move through the lower river as quickly as possible to reduce their exposure to predators and other stressors," Michel explained.

In addition to Michel, the coauthors of the paper include Jeremy Notch and Flora Cordoleani at UCSC and Arnold Ammann and Eric Danner at NOAA Fisheries. Funding and resources for the study were provided by the U.S. Bureau of Reclamation, U.S. Fish and Wildlife Service, and the Central Valley Project Improvement Act. 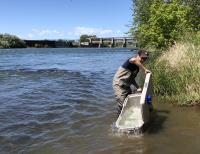