We know how important bacteria and fungi are for the health of plants. In marine environments and in our own gut, bacteriophages (viruses that infect bacteria) are important in regulating the microbiome. Yet, their effect on bacteria living around the roots of plants has hardly been studied. 'I cannot believe that they are not important,' says Joana Falcao Salles, Professor of Microbial Community Ecology at the University of Groningen. She is the lead author of a review paper in Trends in Microbiology, which argues for more research into the role of bacteriophages in plant health.

Bacteria play an important role in many ecosystems. The possibility of large-scale DNA identification of microorganisms has revealed this over the past decade. But bacteria themselves are affected by bacteriophages, viruses that infect them. These phages can lyse the bacteria, which releases nutrients into the environment. On the other hand, the phages can live inside bacterial cells and affect their function. Finally, bacteriophages stimulate DNA transfer between cells and are known to have given cells new functionalities through this horizontal gene transfer.

'We know that soil bacteria are important for plants as well,' says Salles. Soils are deserts with very little food, as most nutrients are present in complex forms that microorganisms cannot readily use. However, in the few millimetres of soil around plant roots, plants stimulate the growth of bacteria. Plants release carbon sources for the bacteria and the bacteria provide nutrients and protection for the roots. 'This creates an oasis called the rhizosphere,' explains Salles.

Salles wrote the review article with former University of Groningen PhD student Akbar Adjie Pratama (now working as a postdoc at Ohio State University, US), MSc student Jurre Terpstra (who's bachelor thesis inspired the review) and visiting scientist Andre Luiz Martinez de Oliveria from Universidade Estadual de Londrina, Brazil. In it, she describes the role of bacterial viruses in modifying the microbial community in seawater and in the gut. 'If viruses are important in these systems, why would they not be important in the rhizosphere?' she asks. Nevertheless, this was the conclusion of a paper published not too long ago. 'The scientists had counted viral particles in the soil and found very few of them. However, bacteriophages can even have effects when they are living inside cells,' Salles explains.

Technical problems may also have affected studies into soil viruses, she adds: 'We have the technology to identify viruses in ocean water and in our gut. Finding them in soil is quite a challenge.' It is relatively simple to filter virus particles from water but isolating them from a slurry is far more complicated. Salles suspects that this has led to bacteriophages being overlooked. 'There are just a handful of institutes where soil phages are being studied.'

Her own institute, the Groningen Institute for Evolutionary Life Sciences, has only recently appointed a virologist. Salles and her team will now start to look for evidence of the importance of bacteriophages. 'For instance, certain phages could stimulate microbes that will protect plants during droughts.' In another project, Salles wants to test the effect of viruses on the potato microbiome, using a large number of different potato breeds.

'Microbes were once considered to be unimportant,' Salles continues, 'until microbiome technologies showed otherwise. Sequencing viruses has become much easier now and I cannot imagine that they are not important. Bacteriophages are the forgotten sibling and, in my opinion, we underestimate their importance.'

Even bacteria can catch viruses. These viruses play an important role in nature. For example, they can change the number of certain bacterial species by killing bacteria, thereby freeing lots of nutrients or they can transfer DNA between cells. Bacterial viruses (also called bacteriophages) can play an important role in maintaining a healthy community of bacteria in our gut and can do the same in seawater. However, their role in soils is unclear. In a review article, Joana Falcao Salles, Professor of Microbial Community Ecology at the University of Groningen, argues that it is very likely that they are important for plant health: plants need bacteria around their roots to provide them with all kinds of nutrients and other compounds. Viruses will have an impact on these bacterial communities. Therefore, viruses are likely to be important for the health of plants.

Overlooked: The role of bacterial viruses in plant health 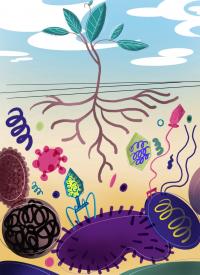 Belowground Microbial Communities in the Rhizosphere