PASADENA, Calif.—When black holes slam into each other, the surrounding space and time surge and undulate like a heaving sea during a storm. This warping of space and time is so complicated that physicists haven't been able to understand the details of what goes on—until now.

By combining theory with computer simulations, Thorne and his colleagues at Caltech, Cornell University, and the National Institute for Theoretical Physics in South Africa have developed conceptual tools they've dubbed tendex lines and vortex lines.

Using these tools, they have discovered that black-hole collisions can produce vortex lines that form a doughnut-shaped pattern, flying away from the merged black hole like smoke rings. The researchers also found that these bundles of vortex lines—called vortexes—can spiral out of the black hole like water from a rotating sprinkler.

The researchers explain tendex and vortex lines—and their implications for black holes—in a paper that's published online on April 11 in the journal Physical Review Letters.

Tendex lines describe the stretching force that warped space-time exerts on everything it encounters. "Tendex lines sticking out of the moon raise the tides on the earth's oceans," says David Nichols, the Caltech graduate student who coined the term "tendex." The stretching force of these lines would rip apart an astronaut who falls into a black hole.

Vortex lines, on the other hand, describe the twisting of space. If an astronaut's body is aligned with a vortex line, she gets wrung like a wet towel.

When many tendex lines are bunched together, they create a region of strong stretching called a tendex. Similarly, a bundle of vortex lines creates a whirling region of space called a vortex. "Anything that falls into a vortex gets spun around and around," says Dr. Robert Owen of Cornell University, the lead author of the paper.

Tendex and vortex lines provide a powerful new way to understand black holes, gravity, and the nature of the universe. "Using these tools, we can now make much better sense of the tremendous amount of data that's produced in our computer simulations," says Dr. Mark Scheel, a senior researcher at Caltech and leader of the team's simulation work.

Using computer simulations, the researchers have discovered that two spinning black holes crashing into each other produce several vortexes and several tendexes. If the collision is head-on, the merged hole ejects vortexes as doughnut-shaped regions of whirling space, and it ejects tendexes as doughnut-shaped regions of stretching. But if the black holes spiral in toward each other before merging, their vortexes and tendexes spiral out of the merged hole. In either case—doughnut or spiral—the outward-moving vortexes and tendexes become gravitational waves—the kinds of waves that the Caltech-led Laser Interferometer Gravitational-Wave Observatory (LIGO) seeks to detect.

"With these tendexes and vortexes, we may be able to much more easily predict the waveforms of the gravitational waves that LIGO is searching for," says Yanbei Chen, associate professor of physics at Caltech and the leader of the team's theoretical efforts.

Additionally, tendexes and vortexes have allowed the researchers to solve the mystery behind the gravitational kick of a merged black hole at the center of a galaxy. In 2007, a team at the University of Texas in Brownsville, led by Professor Manuela Campanelli, used computer simulations to discover that colliding black holes can produce a directed burst of gravitational waves that causes the merged black hole to recoil—like a rifle firing a bullet. The recoil is so strong that it can throw the merged hole out of its galaxy. But nobody understood how this directed burst of gravitational waves is produced.

Now, equipped with their new tools, Thorne's team has found the answer. On one side of the black hole, the gravitational waves from the spiraling vortexes add together with the waves from the spiraling tendexes. On the other side, the vortex and tendex waves cancel each other out. The result is a burst of waves in one direction, causing the merged hole to recoil.

"Though we've developed these tools for black-hole collisions, they can be applied wherever space-time is warped," says Dr. Geoffrey Lovelace, a member of the team from Cornell. "For instance, I expect that people will apply vortex and tendex lines to cosmology, to black holes ripping stars apart, and to the singularities that live inside black holes. They'll become standard tools throughout general relativity."

The team is already preparing multiple follow-up papers with new results. "I've never before coauthored a paper where essentially everything is new," says Thorne, who has authored hundreds of articles. "But that's the case here." 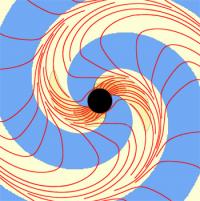