A research team led by Osaka University investigated the formation ages of 59 lunar craters with a diameter of approximately 20 km using the Terrain Camera (TC) onboard the lunar orbiter spacecraft Kaguya.

This group demonstrated that an asteroid of 100 km in diameter was disrupted 800 million years ago (800 Ma) and that at least (4–5)×1016 kg of meteoroids, approximately 30–60 times more than the Chicxulub impact, must have plunged into the Earth-Moon system. Their research results were published in Nature Communications.

Since a thin layer of iridium (Ir) enrichment (a rare earth element) 65.5 Ma had been detected worldwide, it is thought that an asteroid of 10–15 km in diameter hit the Earth and caused or greatly contributed to the Cretaceous mass extinction.

The probability of an asteroid of this size striking Earth is thought to be once in 100 million years. It is known that impact craters on Earth created before 600 Ma have been erased over the years by erosion, volcanism, and other geologic processes. Thus, to find out about ancient meteoroid impacts on Earth, they investigated the Moon, which has almost no erosion.

They investigated the formation age distribution of 59 large craters with diameters larger than approximately 20 km by examining the density of 0.1–1 km-diameter craters in the ejecta of these 59 craters. One of these examples is the Copernicus crater (93 km in diameter) and its surrounding craters (Figure 2). The density of 860 craters with diameter of 0.1–1 km (shown in green) was examined to derive the age of the Copernicus crater. As a result, 8 of 59 craters were found to be formed simultaneously (17 by a spike model), a world first. (Figure 3)

Considering crater scaling laws and collision probabilities with the Earth and Moon, at least (4–5)×1016 kg of meteoroids, approximately 30–60 times more than the Chicxulub impact, must have struck the Earth immediately before the Cryogenian (720–635 Ma), which was an era of great environmental and biological changes.

Because Eulalia's surface reflectance is similar to that of near-Earth C-type asteroid Ryugu, Eulalia has drawn attention as a parent body of a C-type Rubble pile, a celestial body consisting of numerous pieces of rock near the Earth. (Sugita et al. 2019)

Ryugu was probed by the asteroid explorer Hayabusa2, an asteroid sample-return mission operated by JAXA.

From these considerations, they concluded that sporadic meteorite bombardment due to the disruption of asteroids 800 Ma caused the following:

-Some of the resulting fragments fell on terrestrial planets and the Sun,

-Others stayed in an asteroid belt as the Eulalia family, and

-Remnants had orbital evolution as a member of near-Earth asteroids.

This research suggests the following possibilities:

1. An asteroid shower may have brought a large amount of phosphorus (P) to the Earth, affecting the terrestrial surface environment,

2. A recent C-type asteroid shower may have contaminated the lunar surface with volatile elements,

3. The Eulalia family, the parent body of a near-Earth C-type asteroid, may have brought an asteroid shower to the Earth and the Moon.

Lead author Professor Terada says, "Our research results have provided a novel perspective on earth science and planetary science. They will yield a wide range of positive effects in various research fields."

The article, "Asteroid shower on the Earth-Moon system immediately before the Cryogenian period revealed by KAGUYA" was published in Nature Communications at DOI: https://doi.org/10.1038/s41467-020-17115-6 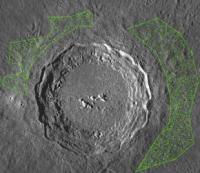 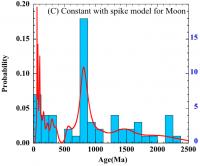