The Belgian coastal dunes, a protected habitat of high conservation value, are getting severely impacted by one of its worst enemies amongst invasive species: the Oregon grape. To help mitigate the detrimental effect of this North American shrub invader, Belgian scientists carried out an experiment to assess the effectiveness of different management methods.

The Atlantic coastal dunes form a dynamic and diverse ecosystem, home to a large number of native species, many of which are regionally threatened. Embryonic dunes, shifting white dunes, moss dunes, dune grasslands, and dune slacks are considered high conservation value sites, according to the interpretation manual of European habitats. However, the dunes are highly affected by external influences, and one of the most important threats to their biodiversity are invasive non-native plant species. These plants often colonised the dunes as garden escapes or spread from garden waste dumps or public plantings. Oregon grape is one of the worst invaders amongst them.

In their study, published in the open-access journal NeoBiota, the scientists, led by Tim Adriaens and Sam Provoost of the Research Institute for Nature and Forest (INBO), focus on the management of the current populations of Oregon grape (Berberis aquifolium) in the Belgian coastal dunes, where the species has already managed to invade half of the 46 nature reserves and is starting to replace native vegetation. Such a negative effect on the biodiversity of the area requires practical management advice. Due to the high level of infestation of the dunes, the researchers recommend prompt eradication as the most appropriate management strategy. So far, however, it has been unclear which method would show the best effectiveness.

"Invasive shrub species exert an additional pressure on Belgian dune ecosystems, which are already highly fragmented by urbanisation. Oregon grape is one of the worst and should be tackled urgently before it gets out of control," says Tim Adriaens.

Having compared four previously suggested treatments: manual uprooting, foliar herbicide application, stem cutting followed by herbicide and salt application, the scientists reported herbicide leaf treatment to be the most effective method. Manual removal by digging and treating stems with glyphosate showed medium effectiveness. Treating stems with a saturated salt solution appeared rather cosmetic. However, it's not that easy to choose which method would be the best to work with, since with herbicide use there are non-target effects on the environment, economy, and society to be considered.

In Belgium, Oregon grape was first recorded in the wild in 1906 and naturalised in the period 1920-1950. It has been spreading rapidly since the 1990s. This expansion might be linked to cultivated hybrids and global warming, with the latter leading to a lengthened growing season, suggest the scientists. The species likes calcareous soils. Along the Belgian coast, Oregon grape has mainly invaded grey dunes, scrub and woodland.

Thanks to its numerous blue berries, which are easily dispersed over long distances by songbirds, the plant can appear everywhere within the dunes sites, also in places hardly accessible to managers. With the help of a highly branched root system, the plants attach themselves firmly in the sand, which makes manual pulling of mature plants hardly possible and labor-intensive.

"Dune managers and scientists across Europe should unite to draft alert lists and prioritise established alien species for management," Tim says in conclusion.

In conclusion, the scientists highlight the importance of an EU-wide collaboration between scientific communities. Invasive species are not bothered by administrative borders and exchanging experiences on impact and management options is crucial to maintain dune ecosystems in good conservation status.

The research was supported by the Research Institute for Nature and Forest (INBO), Brussels and co-funded by the Interreg 2Seas project RINSE (Reducing the Impact of Non-Native Species in Europe). 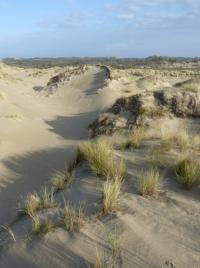