Could bats' cave-dwelling nocturnal habits over eons enhanced their echolocation acoustic abilities, but also spurred their loss of vision?

A new study led by Bruno Simões, Emma Teeling and colleagues has examined this question in the evolution of color vision genes across a large and diverse group of bat species.

They show that the popular expression of being "blind as a bat" really doesn't hold true. Some bats that have the most advanced type of echolocation appear to have traded UV vision for exquisite hearing, and all bats that do not echolocate but live in caves have also lost UV vision. This suggests that not all bats are blind but some certainly have selected other senses over vision.

"Bats' sensory abilities have long been a source of fascination for evolutionary biologists," said Emma Teeling, the corresponding author of the study, which appears in the advanced online edition of the journal Molecular Biology and Evolution. "Using phylogenetics and molecular biology we are now able to delve more deeply into the evolutionary price of acquiring echolocation and nocturnality."

Bats are not just the only mammals that can truly fly, but also the only ones to rely on echolocation to make their way at finding prey in the dark. It's long been argued by scientists that tradeoffs to bat vision were made as a result of this gaining this unique nocturnal sensory adaptation.

An opsin gene's job is to make the photosensitive retina proteins that can turn photons of light into sight to see particular wavelengths. The research team's opsin gene analyses surveyed the largest dataset to date in bats, representing 20 out of 21 bat existing families that were primarily chosen for their diverse echolocation types and ecological niches.

In the study, the authors have shown, among the 111 species examined, the loss of SWS1 gene function is more common in bats than previously thought and suggests that this may be associated with the adoption of cave roosting first traced back to almost 30 million years ago. They found various mutations in the bat genomes that effected SWS1 gene function, with a completely nonfunctional gene found in two species.

Overall, there is a spectral fine tuning that happened to their vision to completely lose short wavelength visible light in the blue/UV wavelengths in 26 of the 111 species examined. They found that for the majority of Old-World, cave roosting bats have a non-functional SWS1 opsin.

Selection on the blue-sensitive SWS1 opsin gene, however, was found to vary significantly among bat species. The research team found evidence of multiple genetic mutations in which different bat species have lost the function of the SWS1 gene. To identify these genetic roots, they used phylogenetic analyses to build gene trees based on the SWS1 results and compared signatures of selection between different ecological niches, such as echolocating vs. non-echolocating species and cave roosting vs. non-cave roosting.

"Our work supports previous hypotheses which suggest the pseudogenization [or loss] of the SWS1 opsin may be related to the adoption of advanced echolocation (high-duty cycle) and, cave roosting habits," said Teeling.

When the SWS1 gene is present and working, the authors confirmed that it gives bats the ability to see in UV light.

"Our spectral tuning analysis of the 11 sites responsible for light sensitivity in the SWS1 opsin gene in both ancestral and extant bat species, provide further support for the presence of UV vision in bats," said Teeling. "In closed-canopy, forest-dwelling mammals a UV sensitive SWS1 opsin is associated with a nocturnal lifestyle. Furthermore, our results demonstrate that this visual pigment has been UV sensitive in all bats since they first diverged from other placental mammals about 78 MYA."

Importantly, the new data makes clear that loss of the SWS1 gene function is not always associated with the acquisition of advanced echolocation, as has been previously suggested.

For the other visual genes, they found that among the 45 species examined, the MWS/LWS opsin gene is highly conserved across lineages and under strong evolutionary pressure to maintain its function.

"Our spectral tuning analysis of the 5 amino-acid sites responsible for the λ max revealed that the majority of bat MWS/LWS visual pigments are tuned to a long-wavelength (~555 - 560nm)," said Teeling. "This suggests that despite the acquisition of laryngeal echolocation and a long history of nocturnality, the MWS/LWS opsin gene has evolved under very strong functional constraint in bats."

"Bats are not blind, with most species capable of seeing in both the UV and middle range of the color spectrum. This suggests that vision is still an important means of sensory perception even in echolocating, nocturnal bats. However, acquisition of the most advanced type of echolocation does coincide with loss of UV vision in most bats and surprisingly cave-roosting drives loss of UV vision in the non-echolocating lineages. This suggests that sensory trade-offs are more complex that previously considered and that bats still make fascinating subjects to understand the evolution of the mammalian sensome!"

This study makes a strong contribution to the ongoing scientific debate regarding the importance of color vision for nocturnal animals. 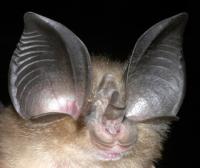 Not Really Blind as Bats