Analysis of a new dinosaur fossil suggests that the largest species ever known to walk the Earth was born with adult-like proportions, perhaps allowing it to be more independent than some other species of dinosaur. While several fossils of the ginormous Rapetosaurus krausei have been analyzed to date, very little is known about this species around the time of hatching. R. krausei is a type of titanosaur, the largest land vertebrates to have evolved. It is estimated to have reached lengths of about 15 meters (49 feet), but even these giants had to start small. Analysis of the new fossil by Kristina Curry-Rogers et al. suggests that the youngster they studied, who died (likely from starvation) between the age of 39 and 77 days, weighed roughly 3.4 kilograms (kg) when it hatched. By the end of its brief life, it had reached a mass of roughly 40 kg and was 35 centimeters tall at the hip. The researchers used bone histology and x-ray computed tomography to understand its growth pattern. Based on the compactness of its bones, the authors say that this dinosaur's limbs likely remained similar in shape throughout its life. This is in contrast to other dinosaur groups, such as theropods and ornithischians, whose limb proportions are different at birth than adulthood; evidence suggests that, in these latter cases, parental care was important. Therefore, the authors propose that R. krausei infants may have been relatively independent after birth, compared to other species. 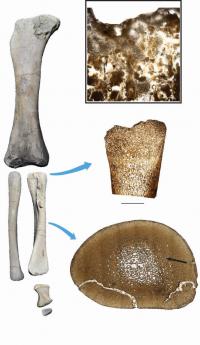