Pittsburgh, Pennsylvania…A team of researchers from Carnegie Museum of Natural History has described a new genus and species of carnivorous amphibian from western Pennsylvania. The fossil skull, found in 2004 near Pittsburgh International Airport, was recovered from rocks deposited approximately 300 million years ago during the Late Pennsylvanian Period. Named Fedexia striegeli, it is one of only a very few relatively large amphibian fossils to display evidence of a predominantly terrestrial (land-based) life history so early in geologic time. The rocks where Fedexia was found are nearly 20 million years older than the localities of its fossil relatives, suggesting that the expansion and diversification of this group occurred much earlier than had been recognized previously. The full paper will be released today in Annals of Carnegie Museum, Volume 78, Number 4, 15 March 2010.

Fedexia was described on the basis of a remarkably well-preserved fossil skull. Unlike similar discoveries, the five-inch-long (11.5 cm) fossil skull remained three-dimensional over time because it was never crushed by rocks that were deposited above it. Fedexia striegeli was named for FedEx, the corporation that owns the land on which the fossil was found, and for amateur discoverer Mr. Adam Striegel, who originally found the specimen on a geology field trip while a senior at the University of Pittsburgh.

Fedexia represents an extinct group of amphibians called Trematopidae that lived about 70 million years before the first dinosaurs appeared. Unlike almost all other Pennsylvanian Period amphibians, which did not often venture out of the water, this rare, diverse group lived mostly on land, returning to the water perhaps only to mate or lay eggs. The trematopids also provide evidence of the earliest vertebrate life in North America adapted to a mostly terrestrial existence. Their success may have been a result of a long-term, global trend toward drier, warmer conditions that reached its climax near the end of the Pennsylvanian Period.

At the time of Fedexia's preservation, the earth's climate was in a period of transition. Immense glaciers in Earth's southern polar region produced rapidly fluctuating global climates. Western Pennsylvania, which was near the equator at that time, experienced tremendous amounts of rain. Swamps which would later develop into coal developed, and amphibians—which are dependent on moist conditions—flourished; in fact, the Pennsylvanian Period is known as the "Age of Amphibians."

Gradually, however, as an increasing amount of the planet's water became locked up in polar ice, the sea level dropped and more land was exposed. Vast regions of the earth became drier and warmer, including the region that would become western Pennsylvania. The coal swamps and lakes dried up, and many of the coal-forming plants became extinct. It was at this time that amphibian populations in what would become the Pittsburgh region shifted from mainly aquatic to mainly terrestrial, paralleling the change in climate from tropical to semi-arid. Vertebrates that had already begun adapting to terrestrial life—including amphibians closely related to Fedexia striegeli—became far more abundant, widespread, and diverse than their relatives who were still dependent upon cooler, moist environments.

The large number of trematopid amphibians appearing in the fossil record in the Permian Period suggests that climate change was a major factor in the diversification of terrestrial amphibians. The appearance of Fedexia during the Pennsylvanian Period—20 million years earlier than the Permian—was an early indicator of the diversification that was to come. Co-author David Brezinski states, "The one-to-one correspondence between this early appearance of trematopids in the fossil record and the preservation of dry climate indicators in the surrounding rock units suggests that this is a climatically driven immigration and/or origination event."

Although the appearance of Fedexia and other highly terrestrial vertebrates in the fossil record seems sudden, this is undoubtedly misleading. They or their close relatives had probably already existed for a few million years, occupying upland regions where conditions for fossil preservation were not optimal. However, the climatic change to drier, warmer conditions led to an explosive dispersal of terrestrial vertebrates to coastal regions and lowlands—including western Pennsylvania—where accumulating sediments increased the chances for fossil preservation. Because western Pennsylvania is the "type stratigraphic sequence"—or best record—of sediments deposited during the Pennsylvanian geologic period, this region offers exceptional opportunities for future discoveries of terrestrial vertebrate fossils of this age.

Fedexia striegeli was described on the basis of a remarkably well-preserved fossil skull. Unlike many other fossil finds, the fossil skull remained three-dimensional and did not suffer post-mortem crushing over time by the compaction of rock formations above it. The preservation of the skull is so precise that even the middle-ear bone, known as the stapes, remains perfectly intact and in its correct position, a very rare discovery in fossils. Owing to the remarkable preservation of the skull, Fedexia was easily identified as a trematopid, mainly by the hallmark feature of the group, a greatly elongated external nasal opening that is partially subdivided into fore and aft portions. Some scientists speculate that the posterior division held a gland—similar to that in some modern-day reptiles and marine birds—that rid the body of excess salt, or perhaps enhanced the sense of smell; either function would have been an advantage for a terrestrial existence. Fedexia is the first trematopid to be found in Pennsylvania, and only the third in the world of Late Pennsylvanian age, the group's earliest appearance. Now that the immediate study of Fedexia striegeli is complete, the fossil has been permanently preserved for future research in the Carnegie Museum of Natural History vertebrate paleontology collection. Casts of the skull will be given to FedEx Corporation and to Mr. Striegel.

According to co-author David S Berman, "What is particularly amazing about this discovery is that it was made by an amateur who had no prior experience in recognizing vertebrate fossils in the rock, a talent that usually takes years to develop."

Publication in Annals of Carnegie Museum

All media and interview requests should be directed to:
Leigh Kish
Carnegie Museum of Natural History
412.622.3361
kishl@carnegiemnh.org

Carnegie Museum of Natural History, one of the four Carnegie Museums of Pittsburgh, is ranked as one of the top five natural history museums in the country. It maintains, preserves, and interprets an extraordinary collection of 20 million objects and scientific specimens used to broaden understanding of evolution, conservation, and biodiversity. More information is available by calling 412.622.3131, or from the Web site, www.carnegiemnh.org. 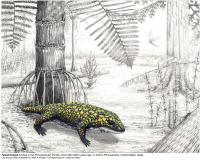 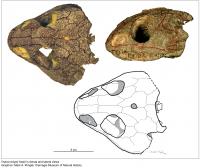